An overall sense of heat, color, spice and sound fills the feeling of a Guatemalan Christmas. Figures dance among sparks and smoke while strands of colored lights glow and reflect against tinsel. Food and drink are abundant in the streets as people wander between houses of their closest friends and relatives, sharing in a game of mystery and playfulness. 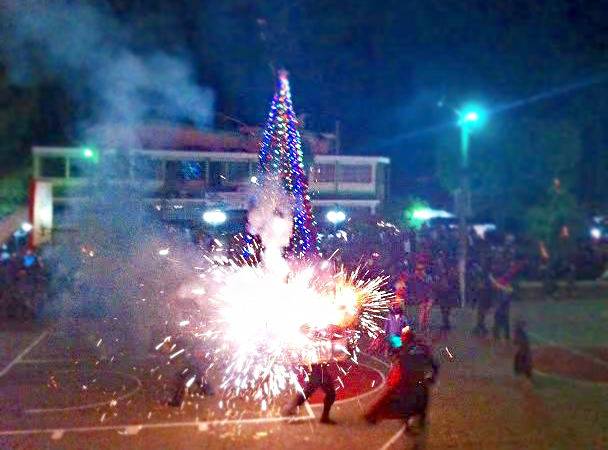 The lake shimmers with rays of the hottest sun of the year, while volcanoes stand watch as specks of color dance and move around in the town below. 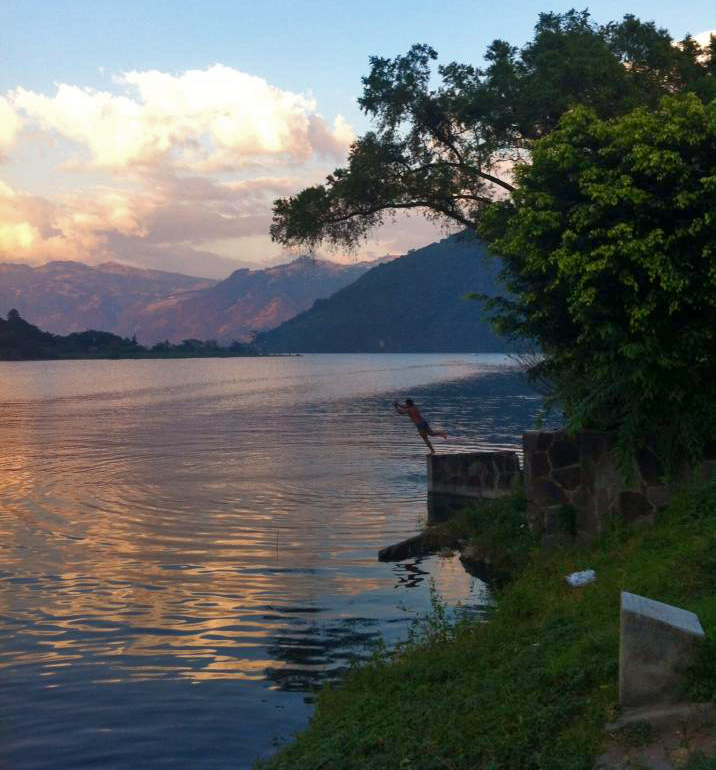 This is Guatemalan Christmas, as told to us by our friend Caitlin—Cultural Exchange Coordinator for Transformational Journeys, a nonprofit organization. 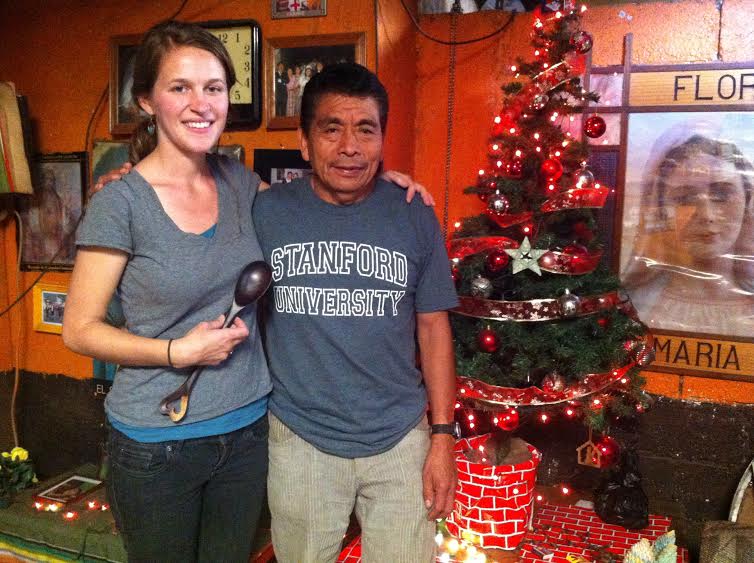 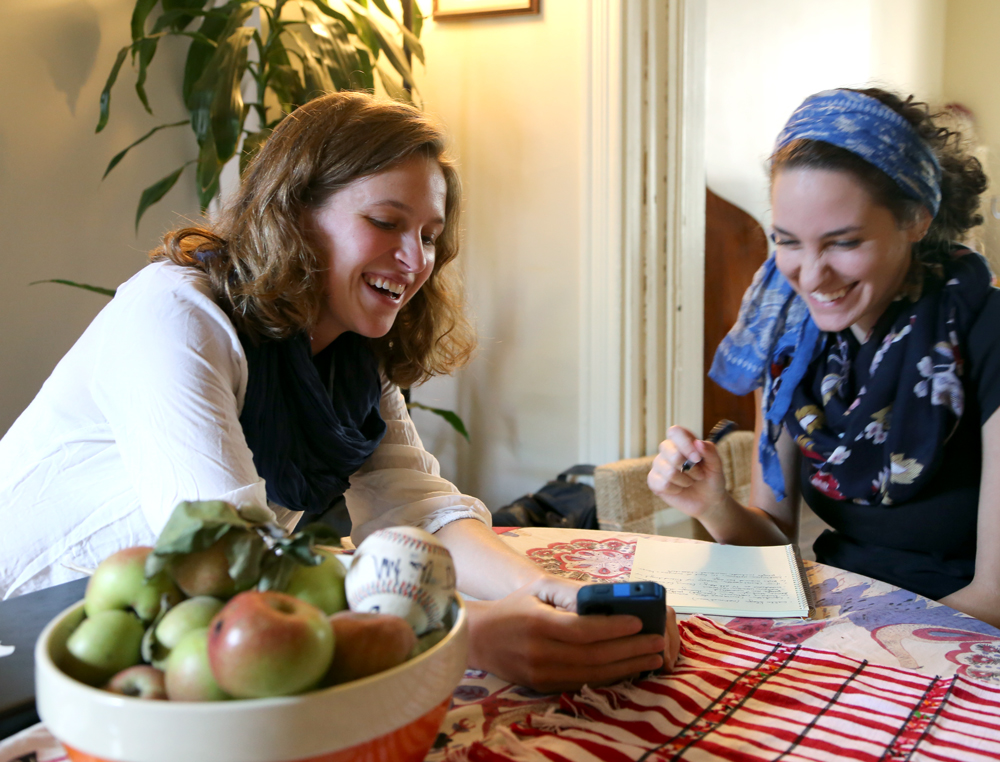 Christmas is celebrated all around the world. And while we might associate the holiday season with snow and hot cocoa, our winter is actually summertime for some countries. Guatemala, for instance, is close enough to the equator that Christmas falls during the peak of coffee harvest season, when the sun beats down with a relentless heat. San Lucas Toliman is a small town on the southern shore of Lake Atitlan. 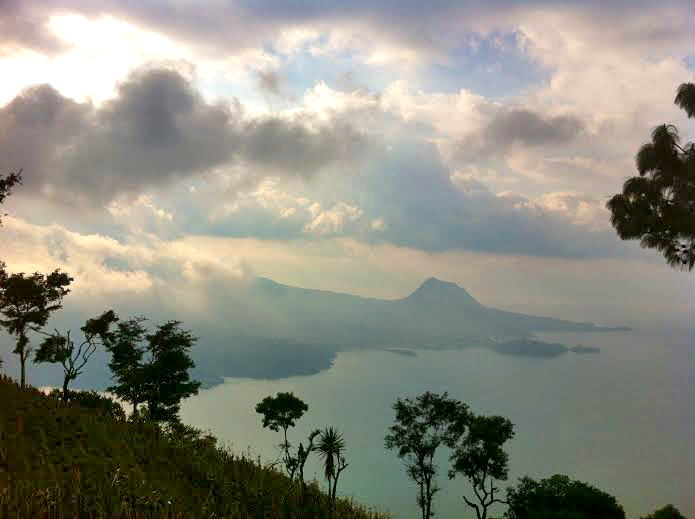 Three volcanoes surrounding the lake have made the soil rich in nitrogen and perfect for growing coffee, which has proven to be an important commodity to the economy of the area. In this region, most people’s first language is Kaqchikel, one of 22 Mayan ethnic groups who share linguistic and cultural heritage; Spanish is their second language. The majority of people in the town are Christian and have adopted their own versions of Christmastime traditions. And they’re pretty different from what we might think of around the holidays.

Caroling generally entails a handful of classic Christmas songs, many derived from old hymns. These tunes often hold a somber tone that seems to capture the chill of winter. But it’s a different story in Guatemala.

In the Posada Procession, a group of townsfolk journeys together from house to house, carrying a large box (like a sedan chair) decorated with lights and tinsel, with a figure of the baby Jesus resting in the center. Posada translates to “accommodation, or lodging,” so this procession is rooted in the biblical journey that Mary and Joseph made, as they searched for a place to stay the night. The procession usually ends at midnight with the baby Jesus being set in the manger at the Catholic Church, just in time for midnight Mass. One aspect of this tradition that is particularly amusing is that because the lights surrounding Jesus are electric, a long cord follows his throne and is connected to a generator, which is pushed along in a wheelbarrow.

Our tradition: Fireplace and Candlelight

The image of stockings hanging over the hearth is a quintessential symbol of Christmastime. Something about the combination of wooly socks and the flicker of firelight brings warmth to this cold time of year.

In addition to the Procession on Christmas Eve, or “noche buena,” young boys perform the “torito” dance. Dressed as bull fighters, they dance to marimba music in the center of the town square, which is decorated with red “gallo” flags. Gallo means rooster, and it is also the name of Guatemala’s national beer! As the boys dance, they light colorful sparklers and wave them around. One boy even carries a large wooden cage that shoots off colorful sparks and smoke.

Our tradition: Nativities inside the home

Some families have different traditions surrounding their nativity. Often times, the baby Jesus won’t be added to the scene until Christmas Day, as a symbolic gesture of the true meaning of Christmas.

Their tradition: Nativities outside the home

While nativities in Guatemala hold true to the common purpose of representing baby Jesus in the manger, the people of San Lucas Toliman put their own spin on the original characters of the nativity and display them outside their homes. Families make their own nativities and include figures of people they know in real life. There are fruit-sellers and soldiers—a cast of different characters, depicted lovingly in vibrant colors. 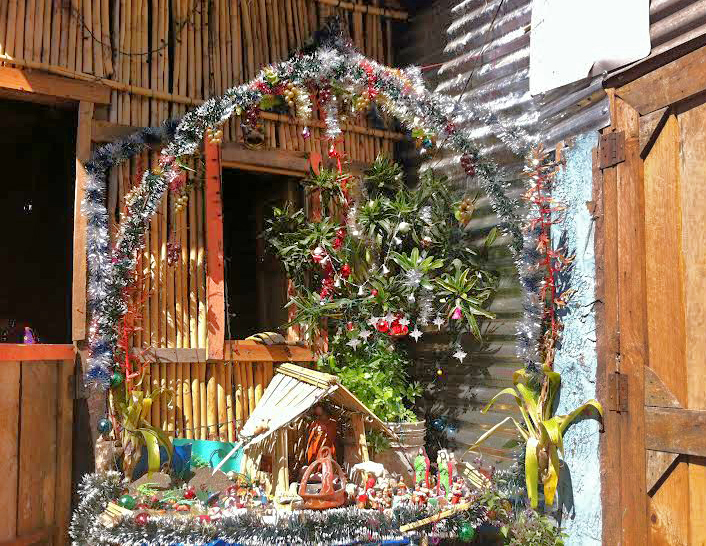 A feast among family is a common Christmas tradition. Whether it’s turkey, duck, ham, or lamb, there is usually much merriment to be had, generally completed with cookies and eggnog.

Their tradition: Tamales and Ponche

You might be familiar with Mexican tamales—cornmeal stuffed with meat and sauce, then steamed inside a corn husk. 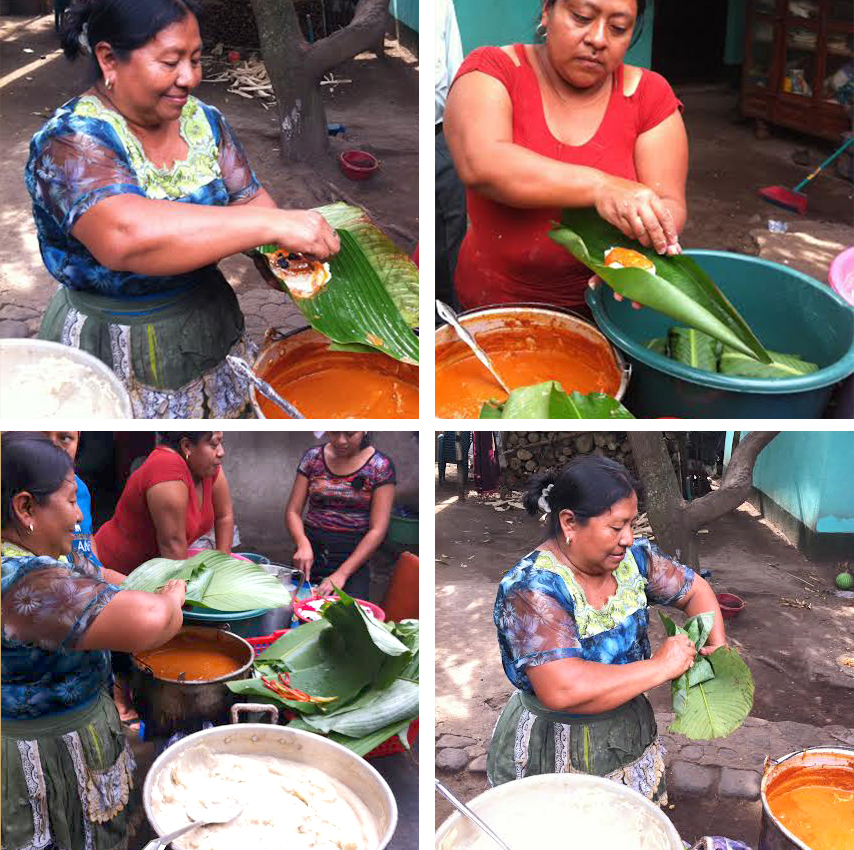 Guatemalan tamales are steamed inside large, green plantain leaves. While sometimes these delicious bundles of cornmeal are filled with chicken, more often they are given just a dash of sauce in the center. They can also be made sweet and filled with raisins. Tamales are traditionally eaten on Christmas Eve (Noche buena) and served with “ponche”: a hot, fruity drink, sometimes spiked with Quetzalteca (a strong liquor.) 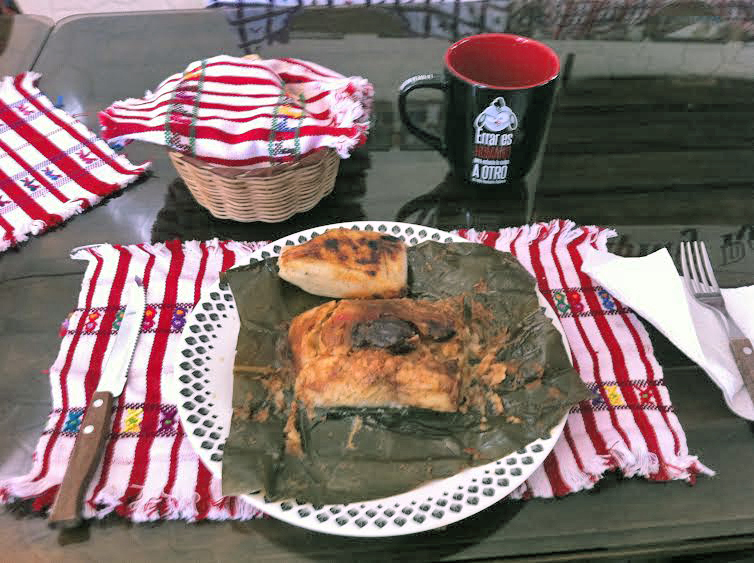 Oh Tannenbaum! Decorating the Christmas tree with lights and ornaments is a huge tradition among North American families.

Their tradition: Pine needles on the floor

Often times, people in the town scatter pine needles over the floor inside their home to create a comforting pine smell that we associate with Christmas as well. Live (or fake) Christmas trees are also common inside homes. 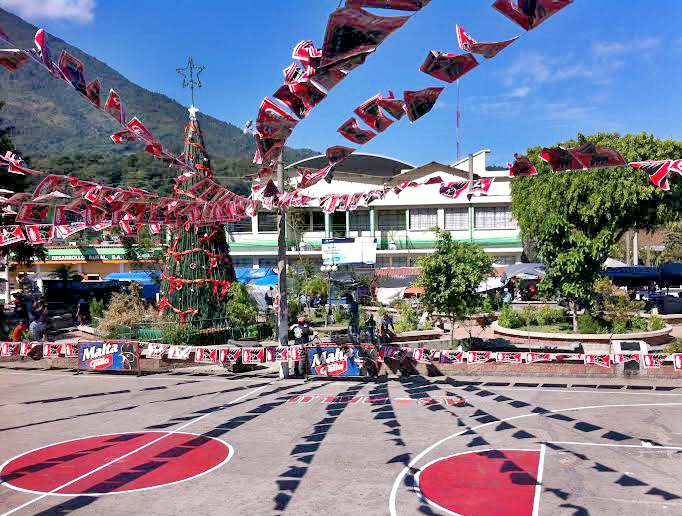 Our tradition: Dressing up

Ladies might don a little something sparkly, or green velvet with a red satin bow and gents may be found in their most festive sweaters. It’s the time of year to break out the gaudiest brooches and patent leather shoes paired with thick tights.

Each village and town has its own signature textile that is worn by its indigenous residents. When traveling, locals can tell which town they’re in, simply by identifying the pattern of clothing worn by people around them. In San Lucas, the traditional pattern is a red and white striped cloth called loy that is made on a back-strap loom. In rows of the cloth, makers include small details such as colorful animals or flowers. While these details may appear to be embroidered, a peek to the other side of the cloth will reveal that every tiny design is actually woven directly into the cloth. 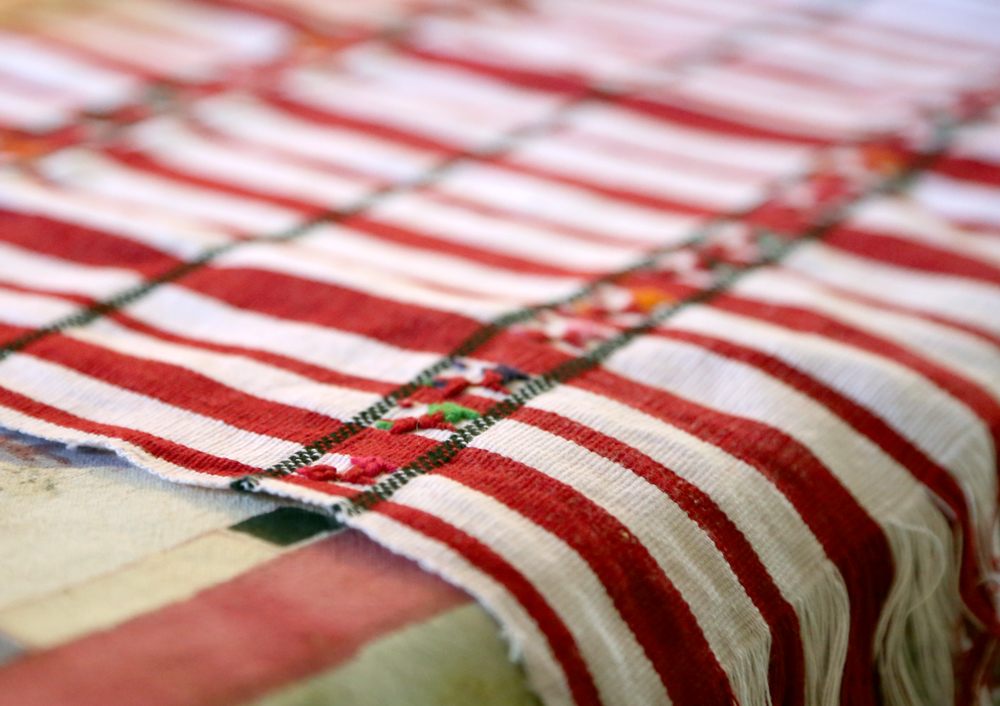 Maybe your hometown hosts a Christmas parade, or maybe you settle for just watching one on TV. In San Lucas, they do both!

On Christmas Day, everyone secretly disguises in fuzzy costumes. While one might expect a folk-art style of costume, people more often choose figures from popular American cartoons! Throughout the day, people parade and dance through the town, before finally meeting in the town square to reveal the secret identity of the person behind the mask, and they all have a good laugh because everyone knows each other. Probably the funniest part of this tradition is that the whole thing is televised all day, and many people prefer to watch the event on TV, rather than stepping outside to see what’s going on right outside their houses. 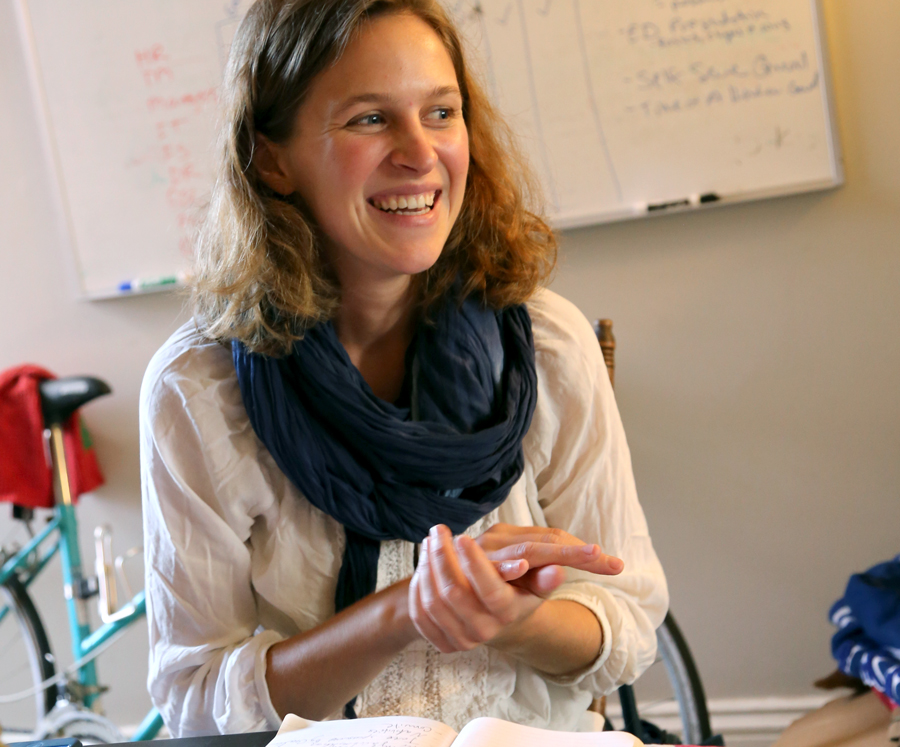 Spanish Interpreter and Guide for the non-profit organization Transformational Journeys, Caitlin enjoys adventurous travel, organic gardening and poetry. When she’s not abroad facilitating cultural exchanges she can be found in Lancaster County volunteering for the Lancaster East Side Market at Musser Park or tutoring foreign language learners in Spanish, French and Italian.