You may never even have heard of a tagine. And if you’re like me, the unknown can sometimes be a little scary. Fear not! Tagine cooking is actually pretty simple.

Let’s start with the basics: 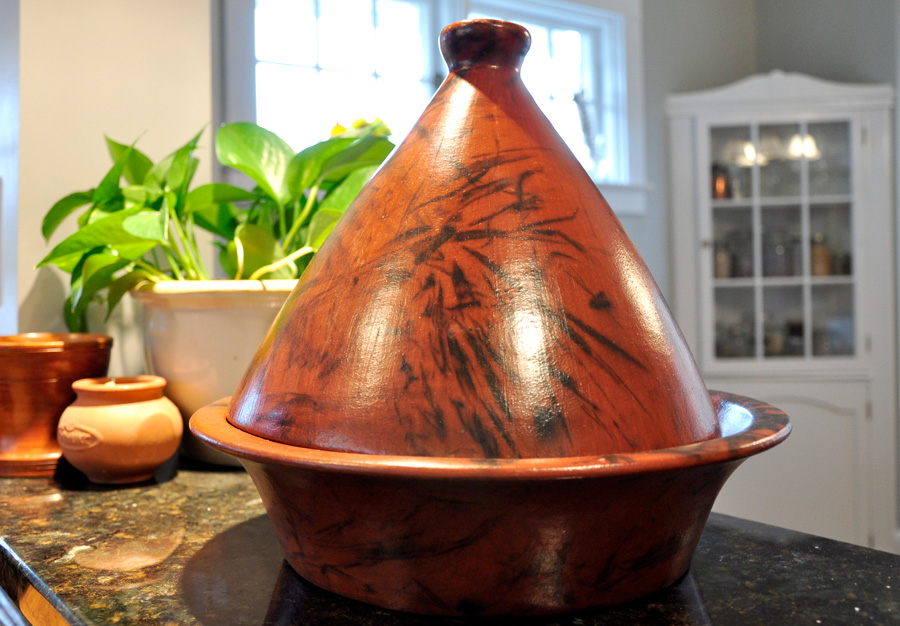 You may find yourself thinking things like:  A West African cooking vessel? What?! I’m not qualified to use one of those. What if it explodes?!  Those thoughts crossed my mind, at least. Most of what I know about cooking I learned from my mom. And she certainly never used a tagine. In fact, I can’t say I know any person who has ever used one! Indeed, it felt like an intimidating way to cook chicken. But there was only one way to find out for sure. In a wave of determination, my friend and I decided that we would tackle the mystery of tagine cooking. But before any actual cooking could happen, we made sure to cure our tagine.

How to cure a tagine before first use:

2. Heat your empty tagine for 10 minutes. 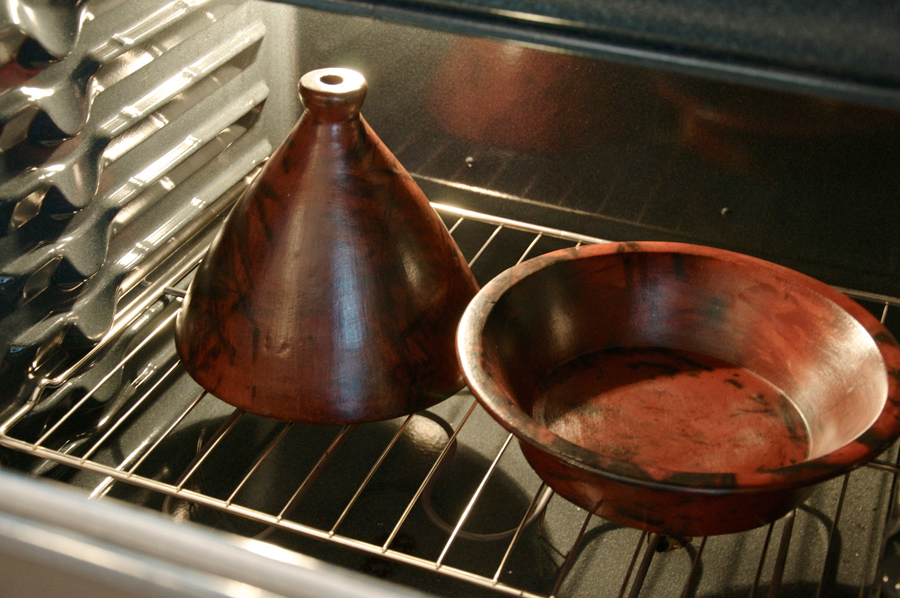 3. Remove it from the oven.

4. We let ours cool for a few minutes before rubbing olive oil all over the inside of it. (All we had was the extra virgin stuff, which I was afraid might give a funny taste to the finished food, but the clay seemed to absorb a lot of the oil and it wasn’t a problem at all.) 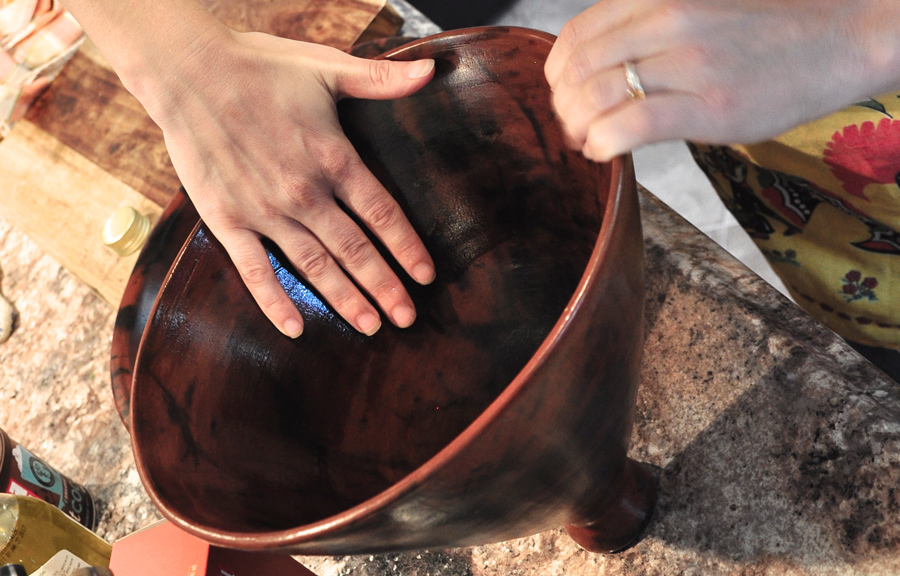 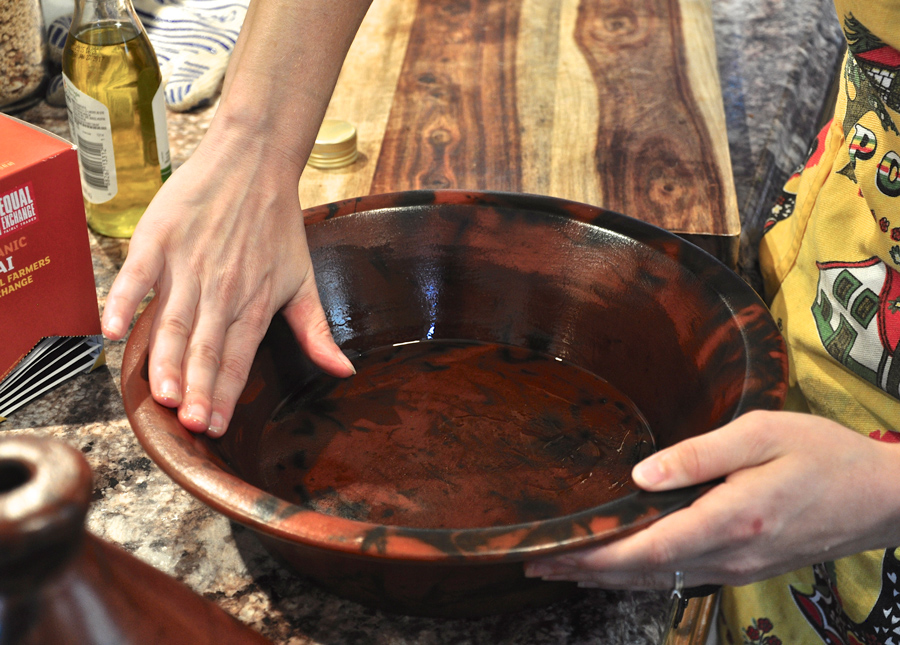 5. Return to the oven for an additional 20 minutes. 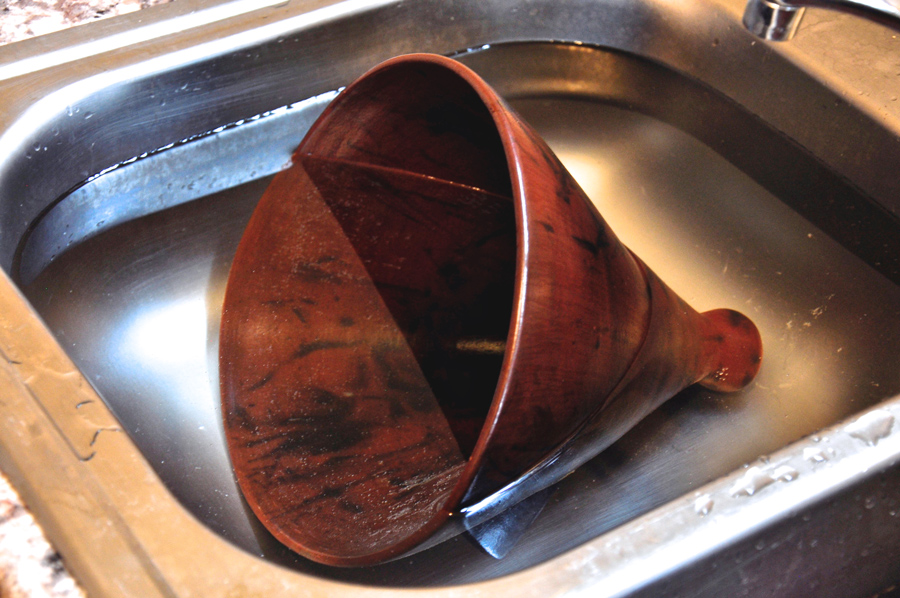 Okay, I know that these instructions may seem like a lot of work. But the time went by really quickly because we used that time to prep our ingredients and catch up about our lives. Plus, it’s a once-and-done procedure—just like curing a cast iron pan. So the next time you break out that tagine, you can totally skip those steps and get right to the good part.

While some tagines do have an actual cast iron base, the one we used was handmade from clay, by artisans on the island of Lombok, Indonesia. This style of ceramic tagine should not be used on a stovetop—just in the oven, up to 400 degrees Fahrenheit. 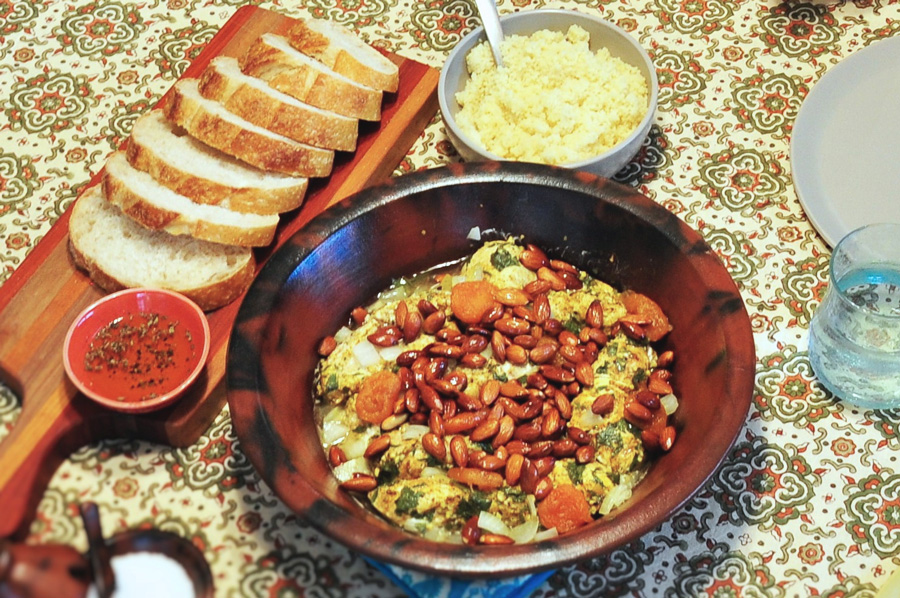 We decided to follow a recipe for chicken with apricots and almonds because (believe it or not) we already had most of the ingredients on hand. Plus, chicken is cheap (and yummy). Combining dried fruits and nuts with meat and spices might seem unusual to us, but is common to Moroccan cuisine.

The recipe also called for cinnamon… which I definitely associate with dessert. So I was a little bit worried that we’d wind up with some sort of weird cinnamon chicken. But the flavor of the cinnamon mixed with the cilantro and other ingredients was actually quite mild and pleasant! We decided to serve our chicken concoction with couscous, fitting with the Moroccan theme. We just used plain couscous in water, so I found that it required a dash of salt. 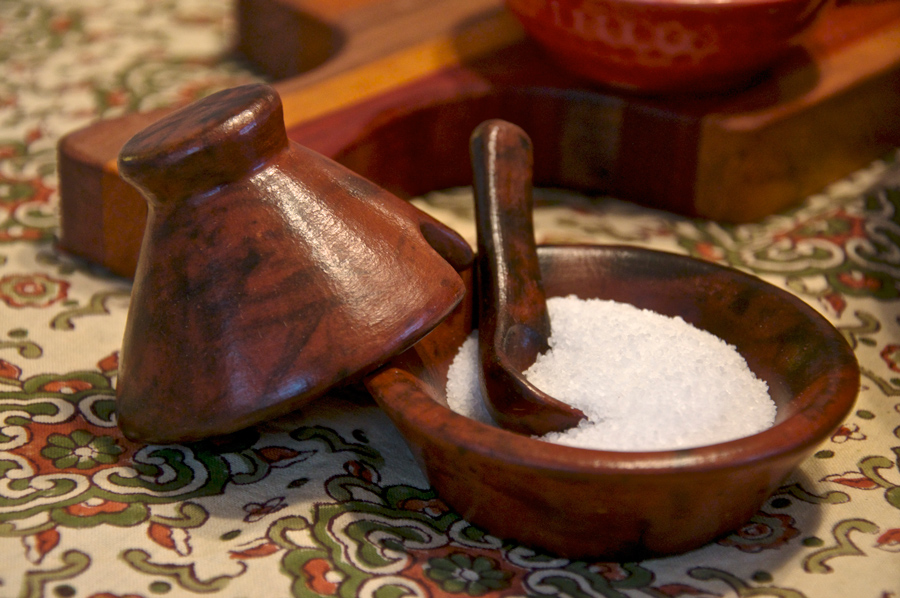 Some good sourdough bread with olive oil and herbs was a perfect finishing touch to our meal. 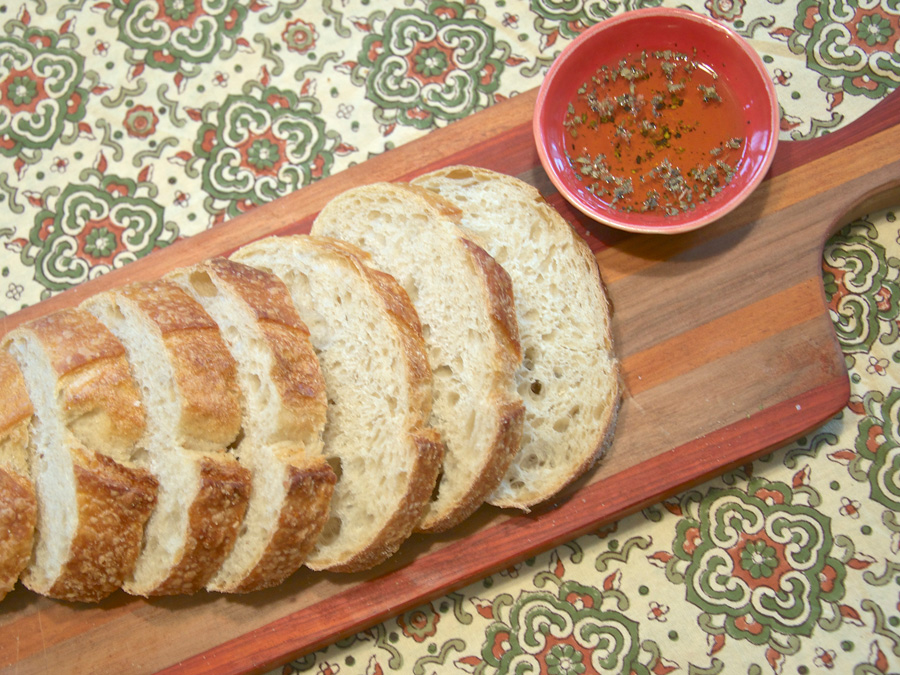 What I loved most about cooking in the tagine is that we used the base as a mixing bowl, cooking vessel, and serving dish. I know that most people these days have dishwashers, but neither of us have one. We like to make every dish count!

Here is what you will need for this recipe:

In a bowl, mix chicken with spices and 1 tablespoon of olive oil (we used the base of the tagine to mix everything together because… not everybody has a dishwasher). Place the onions and chicken in the tagine and mix thoroughly. Add ½ cup of water along with parsley and cilantro. Place in the oven and raise temperature to 350 degrees. Let bake for 45 minutes. 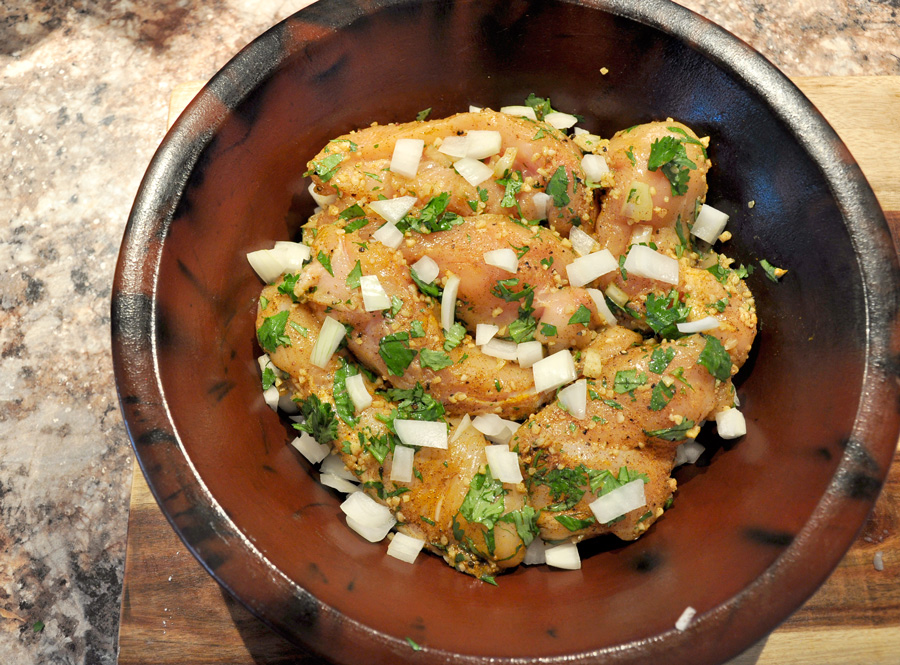 In a separate pan, mix 1 cup of water, honey, cinnamon stick and apricots. Bring to a boil, reduce heat and simmer until apricots are tender—about 15 minutes or until sauce is a syrupy consistency, or until chicken is thoroughly cooked. 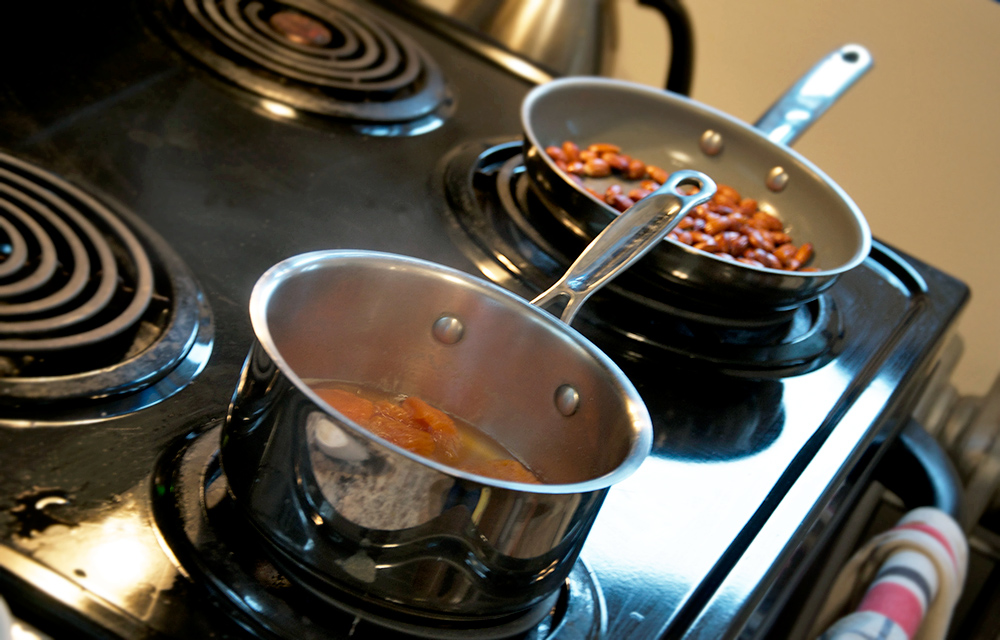 While apricots are cooking, toast the almonds in a pan with olive oil until golden. Remove from pan and transfer to paper towel. When chicken is ready, add the honey mixture and serve with toasted almonds. Add a squeeze of lemon on top if you’d like! 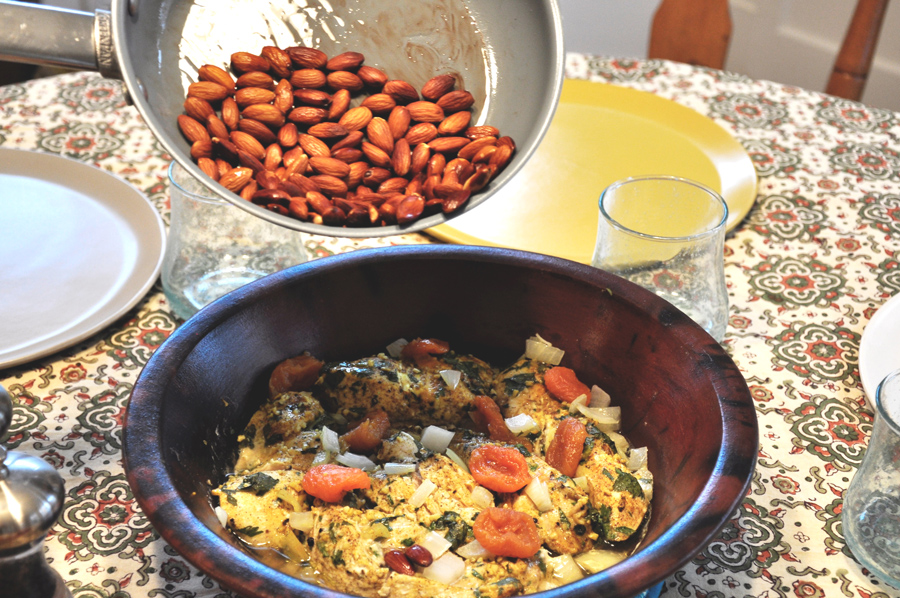 A nice dinner deserves a nice table-setting. A tablecloth, real dishes and silverware go a long way towards making you feel all grown-up. And presenting a worldly dish in an unusual vessel definitely provides a sense of accomplishment. 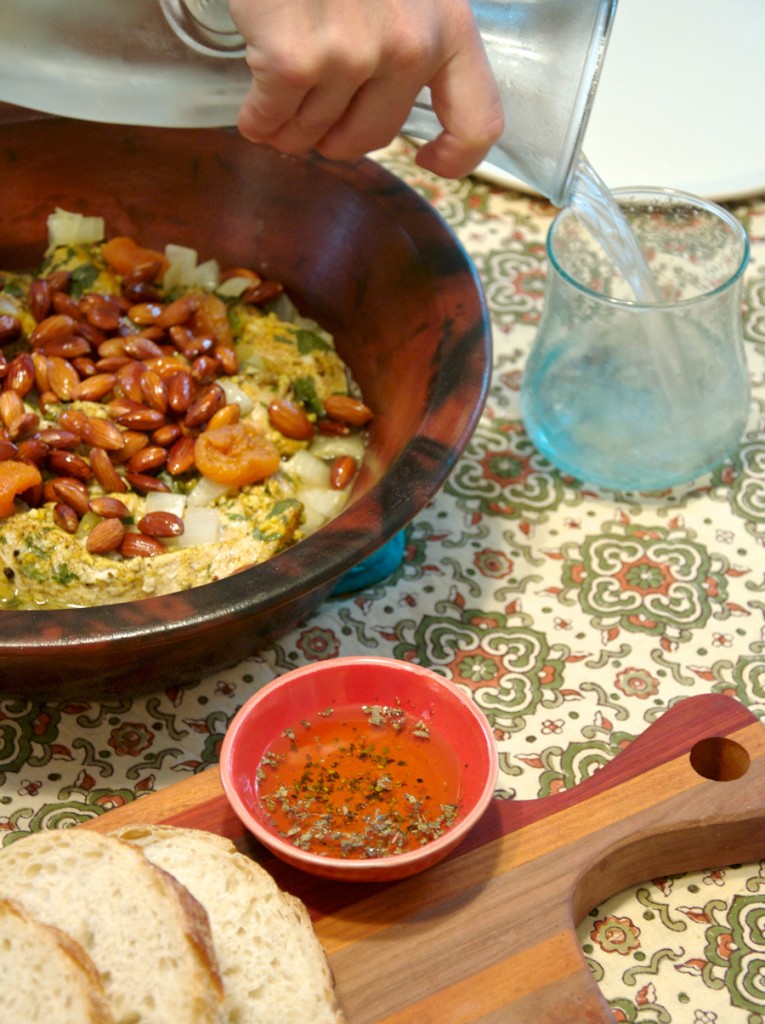 I was a little worried that all the liquid might give the chicken a weird texture and dilute the spices a bit. But the first bite revealed the reason people have been using tagines for centuries. The meat came out perfectly seasoned and tender. And with the finishing touch of those toasted almonds and simmered apricots, this dish was a stunning combination of savory spice, subtle sweetness, and nutty crunch. (And nobody has to know how easy and inexpensive it was.) 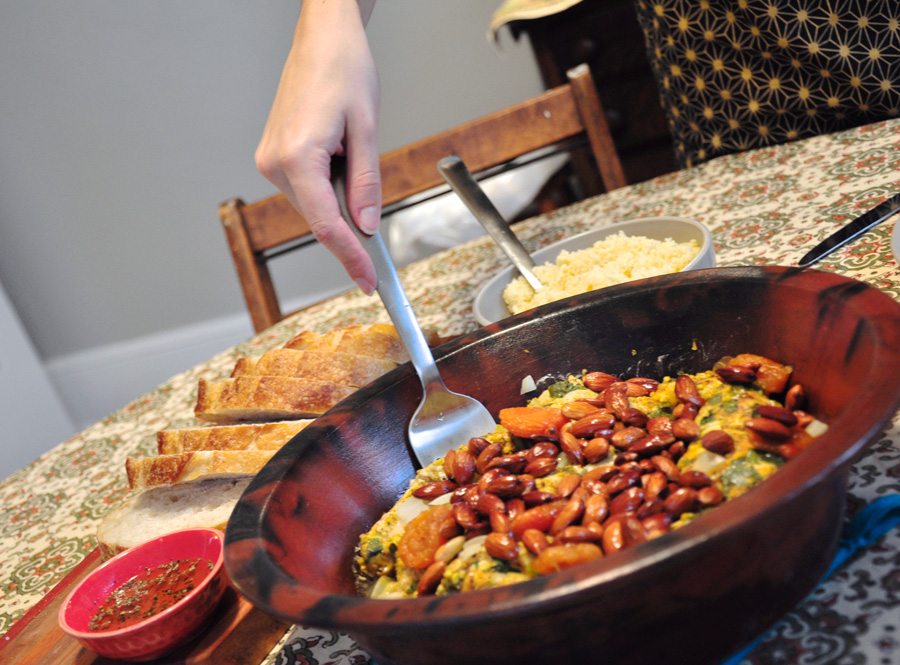 There you have it! Cooking in a tagine. That wasn’t so scary after all.