New Year’s traditions. Every country has them. Fireworks, songs, parades, to name a few. Some traditions are stranger than others. Did you know that in Turkey, everybody wears red underpants? Or that, in Spain, a grape is eaten for each second of the countdown? Stuffing twelve grapes into your mouth may seem like a strange (even dangerous) way to start out the New Year, but there is a reason that even the most rational of people sometimes participate in such behavior. It’s a little phenomenon we call luck. 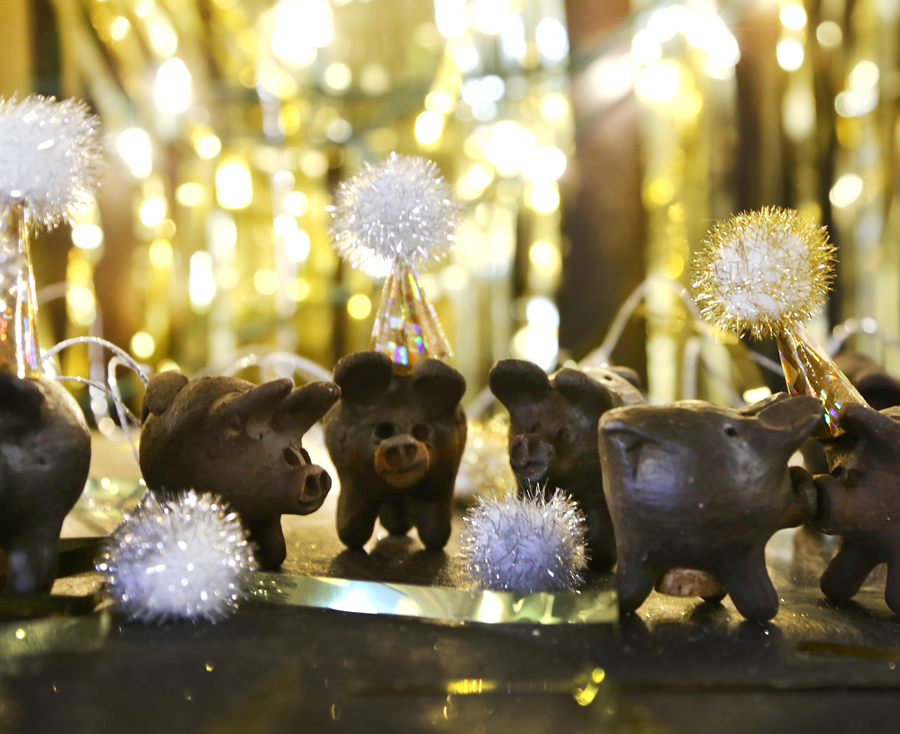 Superstitions somehow emerge from age-old traditions; origins and meanings often are lost among the years, but it doesn’t really matter. As long as the New Year comes with a fresh start and good luck.

You may have heard of eating pork on New Year’s Day. There are countless renditions of this tradition that span across countries and cultures, but they all find their root in the same basic place. The pig is notorious for being rotund, and in many early societies, a voluptuous figure was an indication of wealth, success and prosperity. The pig also roots around with its snout moving forward. This forward momentum represents progress. 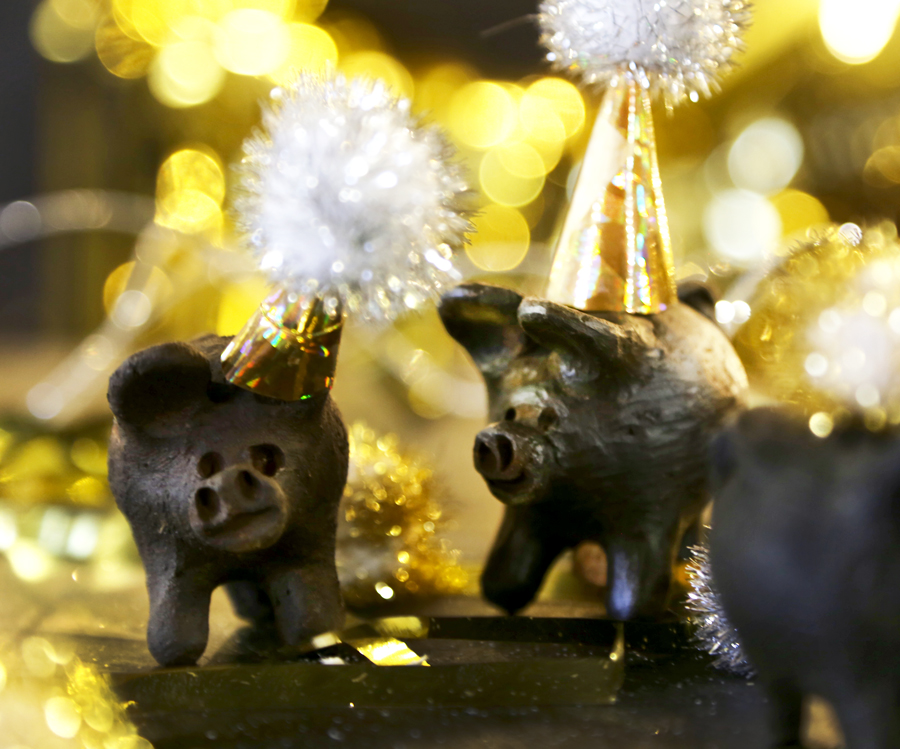 Aside from eating pigs for luck,

there’s an old Chilean legend of a three-legged pig.

An old woman spoke out against the crowd. “Spare the little pig!” she said. “I will take him into my home.” The villagers told her that it was just another mouth to feed and that she would never see any gratitude from a three-legged pig, but the woman was determined. And eventually, the people agreed that the pig could be hers. It wasn’t worth anything anyway.

The old woman wrapped the poor piglet in the shawl from her back and carried it in the crook of her arm, while her other arm leaned on the support of a walking cane. She hadn’t been walking well for many years, herself, and felt sorry for this piglet that would never even have memories of what it’s like to run and jump with all his brothers and sisters. “You’ll be safe with me,” she whispered gently. And the little three-legged pig smiled as it slept nestled in the warmth of her shawl.

A few days passed and the woman tended to the piglet’s needs. She fed him warm milk from a bottle, made sure that he stayed warm and clean. And as the piglet grew, the woman began to notice good fortune coming her way. At first it was simple things… small items turning up that she thought she had lost, or the ingredients in her pantry never seemed to spoil as fast as they used to. And by the time the piglet learned to stand on his three wobbly legs, the luck became undeniable. One day, her son came to visit with wonderful news that his business was finally doing well! He was making enough sales to fix his house, and was even able to hire more help. As if that wasn’t fortune enough, shortly after the repairs had been made, his wife conceived their first child—something they had been wishing for a long time. It seemed that everything was finally turning in their favor. And as her son embraced her with joy, her eyes fell on the three-legged pig, who sat quietly in the corner, smiling wide and knowingly.

Maybe the fact that this pig could stand on only three legs made it especially lucky too. Whatever the origins of the myth, these little piggies certainly are adorable and can be found all around the village of Pomaire, Chile, decorating windowsills and doorways. 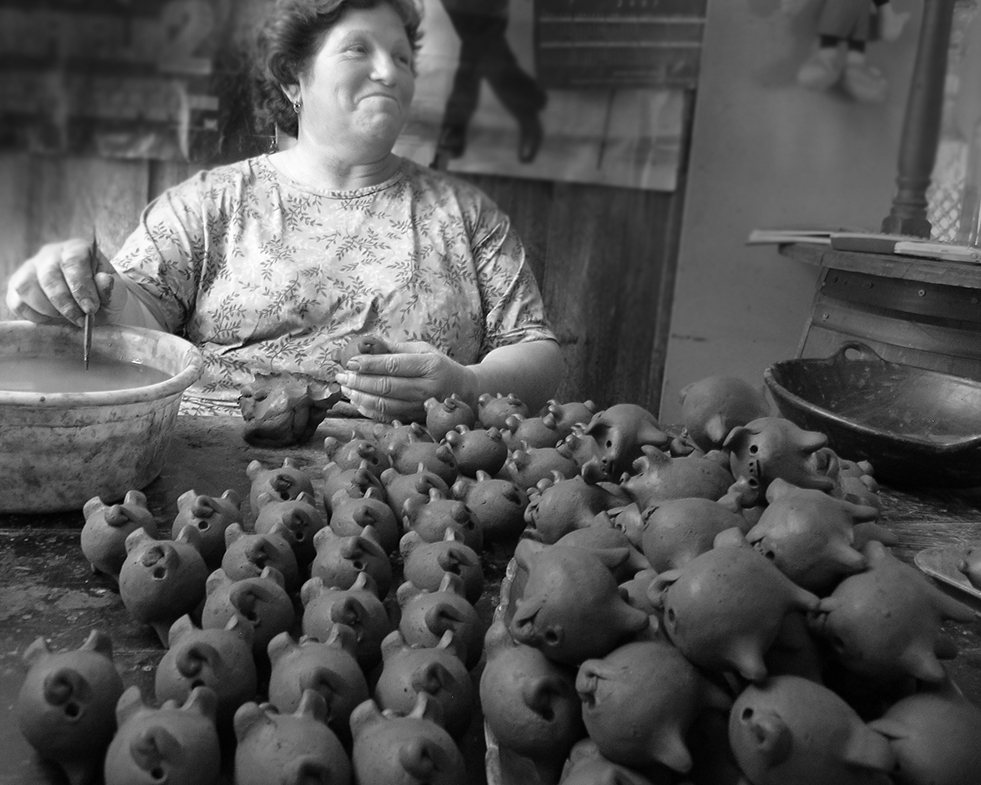 Villagers sculpt them from clay and give them to friends and loved ones as a token of good fortune. The three-legged pig is a symbol near and dear to the hearts of Pomaire’s population. 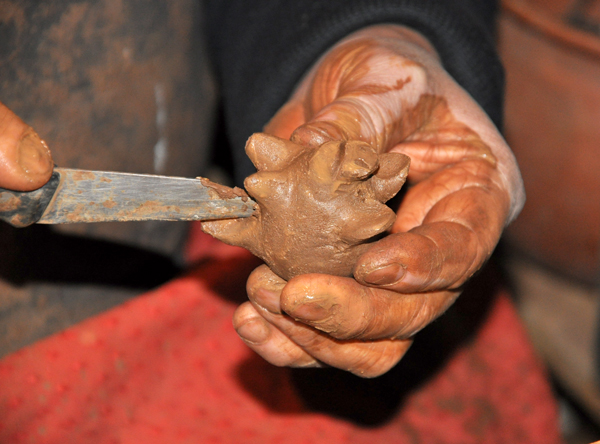 While the original three-legged clay pigs were simply tokens to be hung on the wall or set on a shelf, innovative makers have turned them into a salt and pepper shaker set. Which leads to another legend of luck! In Italy, cooks toss a pinch of salt over their shoulders for good luck. Supposedly, this is because the devil is always following your every move—so throwing salt into his eyes distracts him from causing trouble. (On a more practical note, it might make sense that people who throw away extra salt will live longer, because too much salty food isn’t good for you.)

It’s safe to say that for the ultimate lucky combination, seasoning your food from a three-legged pig salt shaker is an ideal way to welcome the New Year with luck on your side. 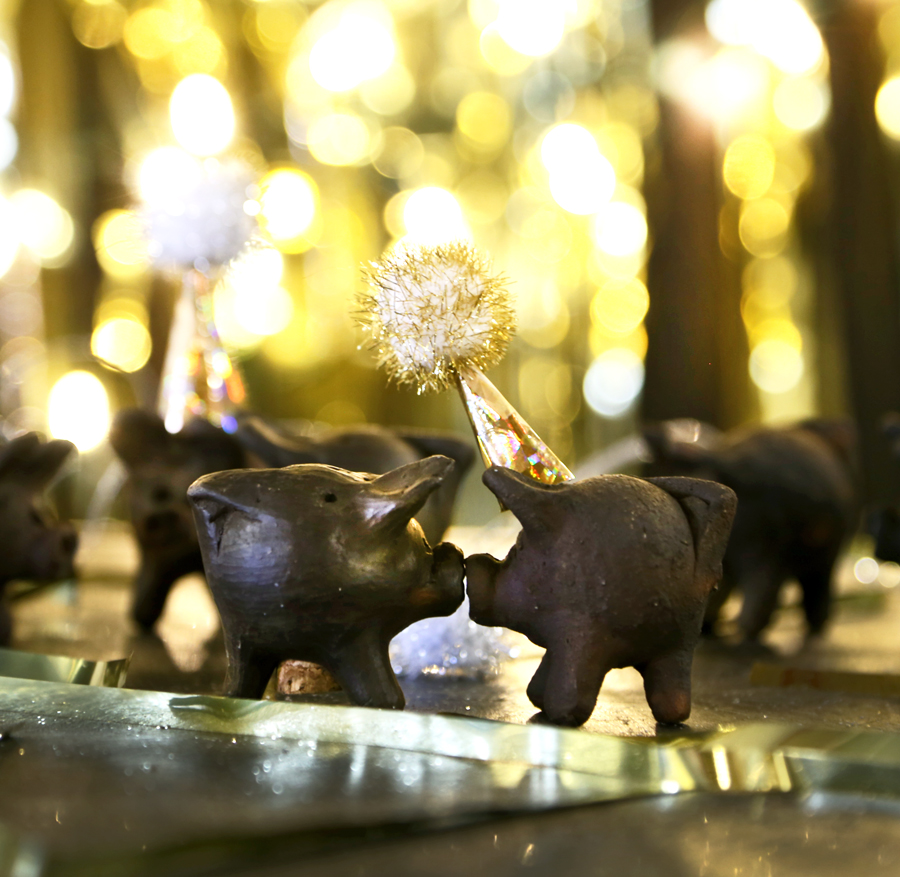 Do you have any unusual traditions for ringing in the New Year?