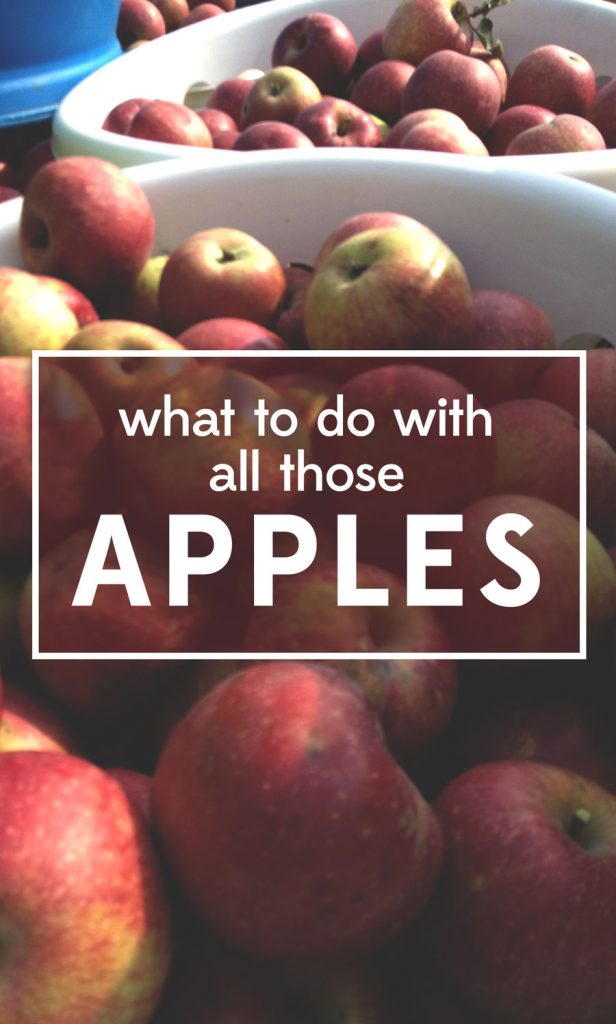 Here’s what to do with all those apples.

Autumn. The season of abundant apples in many parts of the country! If you’re in the vicinity of an apple orchard, apple-picking is a great excuse to get outdoors and get the most out of what autumn has to offer. But once you’re sitting there with all your bushels, you’re left wondering, “now what do I do with all these millions of apples?” To find the answer to that question, we asked a local veggie-grower (and all-around doer) what solution she found to make the best use of all her apple harvest.

Our friend Caitlin has experience running her own organic farm, facilitating cultural exchanges in Guatemala, and tutoring foreign language learners in Spanish, French and Italian. She also has interests in old time music, square dancing and playing fiddle! This Renaissance woman is never afraid to learn new things, done the old-fashioned way. Making cider from scratch at the organic Community Supported Agriculture (CSA) farm was no exception.

Caitlin threw a party called the “Apple Cider All-Nighter,” an evening which started out with some serious cider pressing, and then went on well into the night with food, a bonfire, music, and a little bit of whiskey.

Can you describe the “ Apple Cider All Nighter ” for us?

As a way to celebrate the end of the farming season at Blue Rock Farm we started the Apple Cider All Nighter tradition. Apples are one of the last fruits you can harvest before the winter begins. It’s kind of the last time in the year you can throw a party outside, with a bonfire, food, music. Blue Rock Farm was always looking for opportunities to throw a party. So much of the work we did was alone out in the fields. Having celebrations throughout the season was a way to share the farm with our friends and community…share the fruits of the harvest! Apple Cider All Nighter was a way to draw people out too. A lot of people were attracted to the novelty and nostalgia for an old-fashioned cider-press party. We always had an abundance of apples to press too. 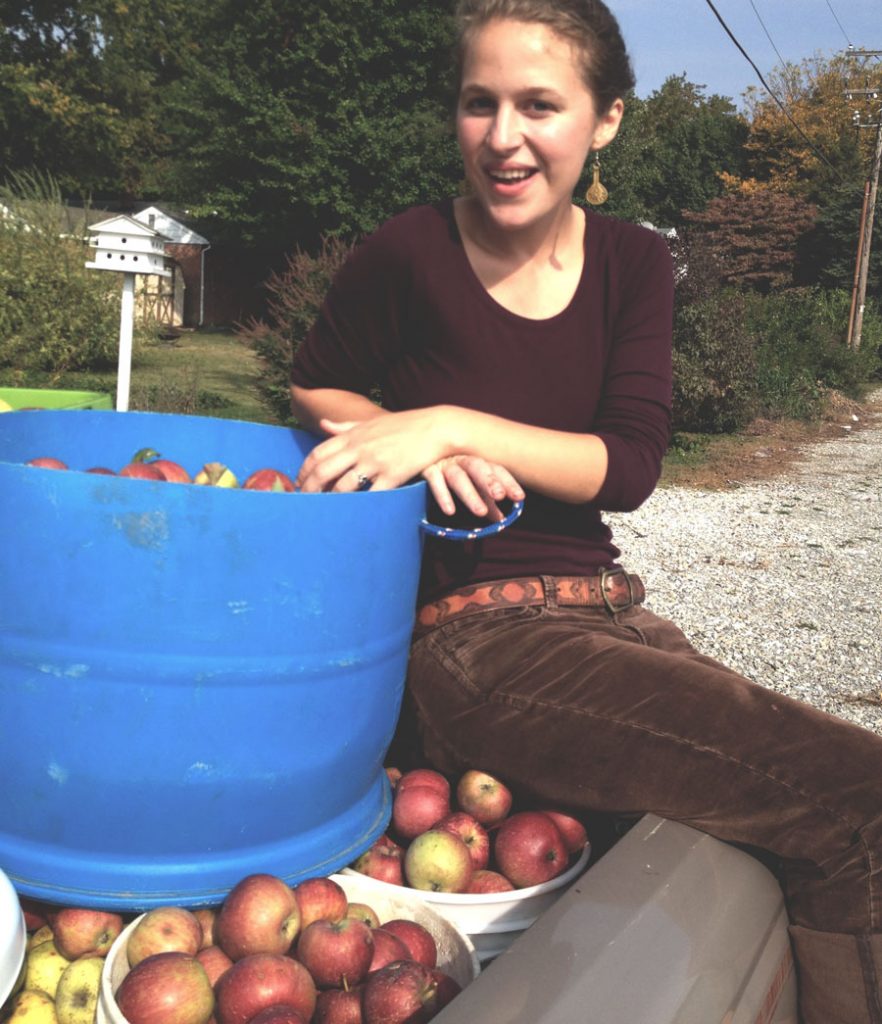 What time of year did it take place?

I think we pressed cider for two or three falls in a row. In the Northeast, we usually pressed in mid-October. It’s one of the last fruit harvests of the year. By October we are well into apple season, and a lot of the ones left on the tree are not the prettiest ones to pick. We would do a couple picks throughout the season. The first ones we would take to market and put in the CSA. The second pickings were for cider. So they could be ugly, mushy, buggy, cracked, overripe, underripe… anything can go into the apple cider! 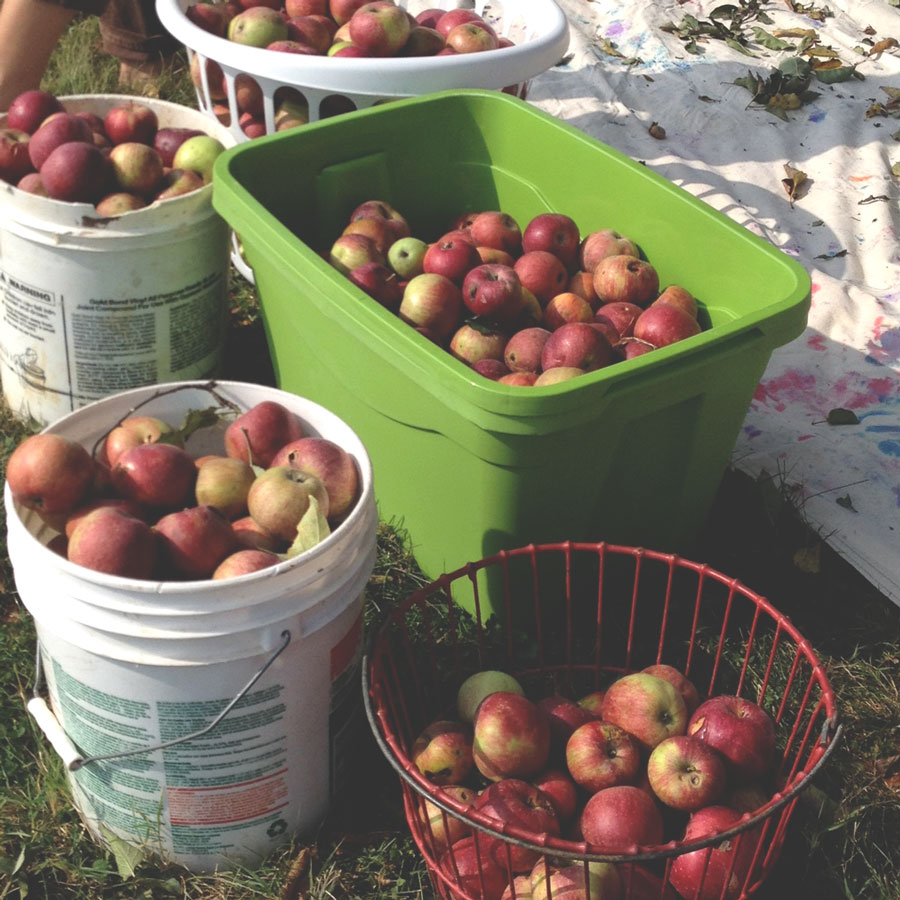 What first gave you the idea to put this event together?

Well, our friends up the road had this old, but functioning, cider press that they weren’t really using. We were at a cookout at their house during the summer and saw it in their garage. We got to thinking, we should ask if we can borrow it and have a big apple cider-pressing party! Before this moment I had never pressed apples in my life, but I was drawn to the romanticism and old-timey American nostalgia of it. 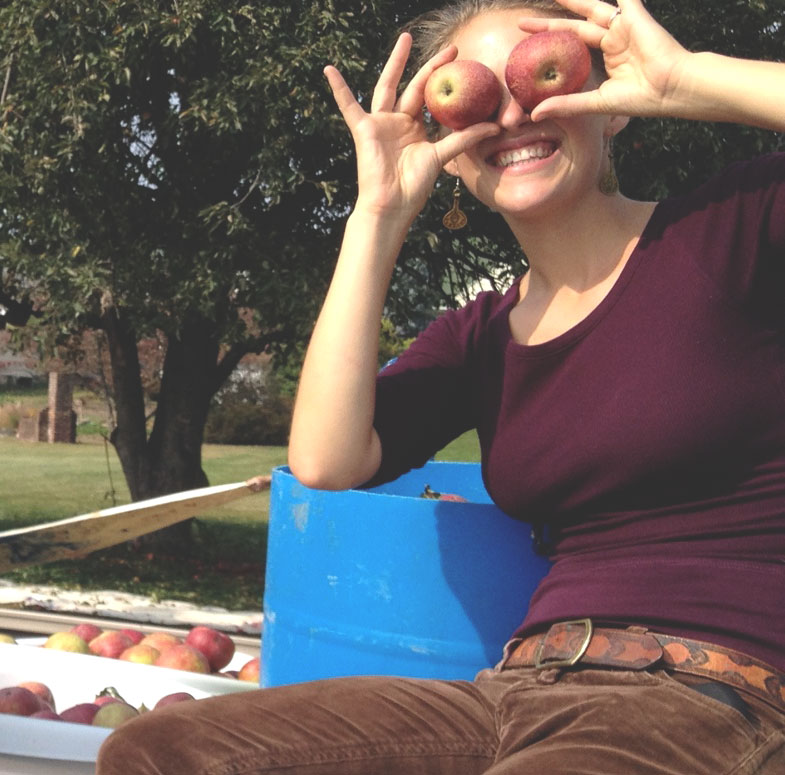 How many people participated?

We could get up to 50 people coming out! We encouraged everyone to bring their own jugs and mason jars to fill up. We always had way more than we could ever drink. 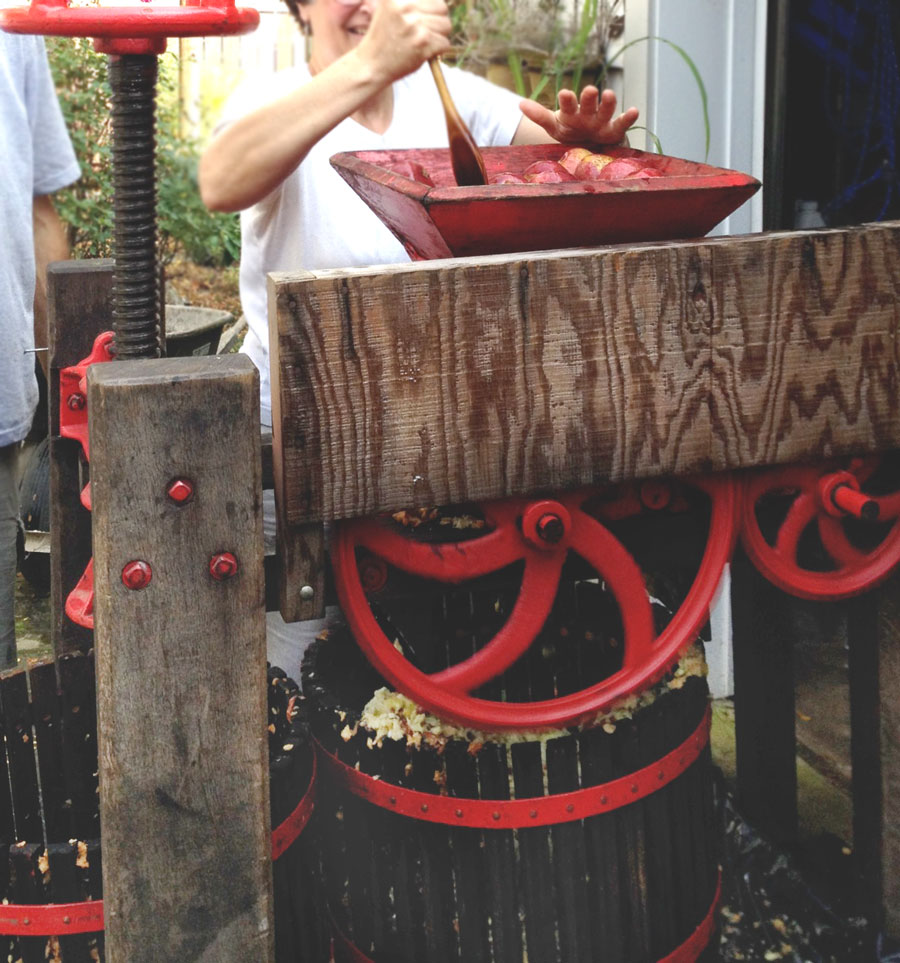 What kinds of other activities were involved (besides pressing apples)?

Well we would have a potluck dinner, and people would bring dishes to share with each other. One year a friend who is a chef catered the entire event on the spot with vegetables he harvested right from the fields. It was amazing! He made some pretty good appetizers with sauerkraut and mustard greens, if I recall correctly. When it started to get dark, we would light up the bonfire, start adding whiskey to the cider, bring out some musical instruments. Sometimes we would dance. 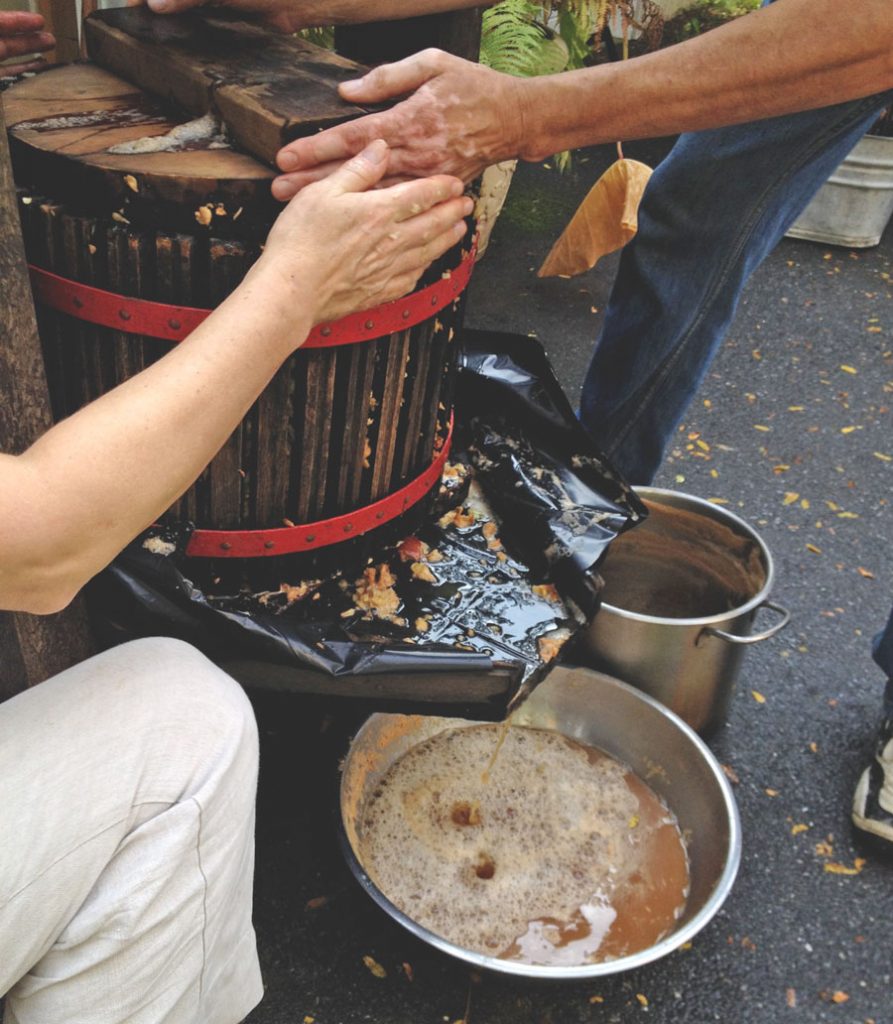 Can you describe the process, step-by-step for us?

There is a hopper at the top of the press with grinding gears below. Our press was hooked up to electricity—it had a small motor that powered the fly wheel/grinder—but I imagine in the past people would crank it by hand. The apples would get ground up into a mush that fell below into slotted open-ended barrels. When the barrels are full, they’re moved beneath a screw that presses a wooden disk into the apple pulp and squeezes the cider out. 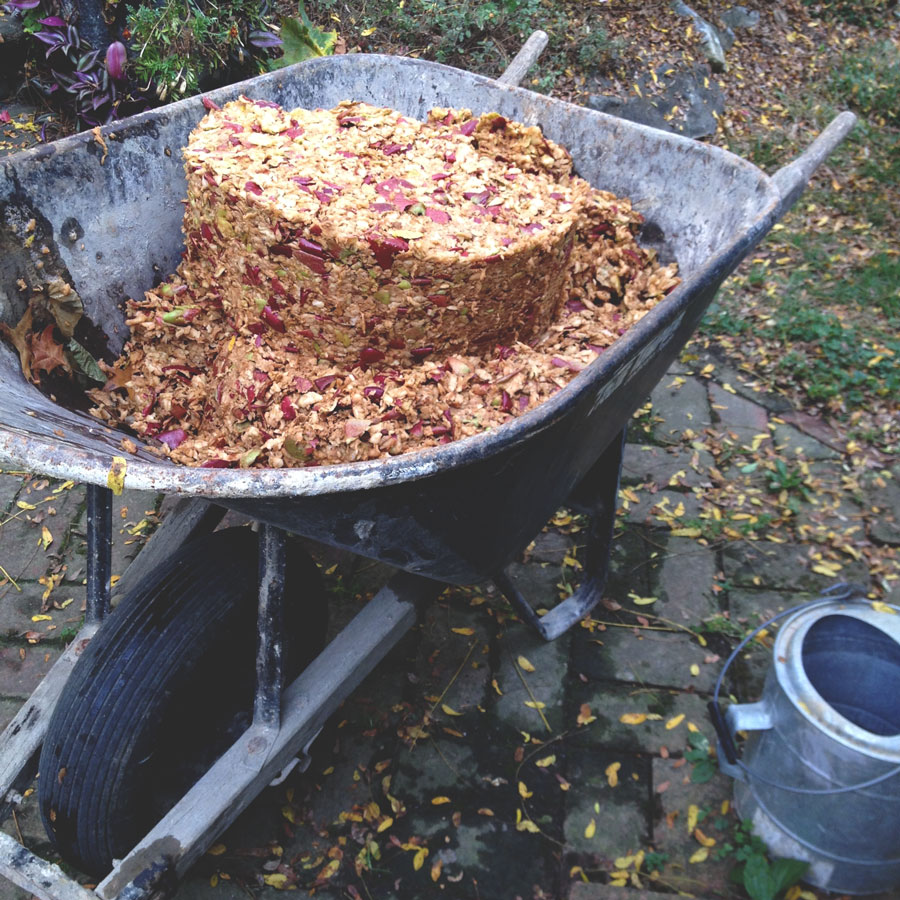 How much cider did you produce?

Was there any left over apple cider? What did you do with that?

Always! We would drink it till we couldn’t stand it anymore and then freeze the rest. We tried to ferment some of it but that didn’t go very well. It would eventually turn into apple cider vinegar.

Were there any moments that stand out?

I just think it was a great time for friends and family to get together in the fall. We were always a mixed group from little kids to teenagers, twenty-somethings, our parents and grandparents. Sometimes we would go out into the field across the road and stargaze. One year there was a special alignment of three planets in a triangular shape. Then we went out to see it and as we were waiting for it to get dark a meteor flashed above the field and everyone saw it together.

So if you find yourself buried in apples this year, fear not! There are ways to keep them from going to waste. If cider-pressing isn’t possible for you, try throwing an applesauce party! Love baking pies? Share your skills with friends and let everyone take their creations home with them.

There are so many great things you can do with apples. What are some of your favorites?