One employee’s story of how an idea became a passion

Bike to Work Day is celebrated each year on May 8 as a way to raise awareness of this healthy, eco-friendly alternative to driving. In fact, much of the world relies on bicycles to help them reach their destination each day. 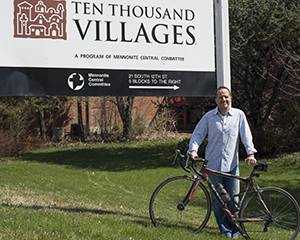 Biking to work may sound like an inconvenient practice, but for Doug Lapp, it’s a joy. Doug is the buyer for Latin America and the Middle East at Ten Thousand Villages. He has been biking to work regularly for the past 30 years.

Doug first began biking to work several years ago with friends who lived nearby. At that time, his commute was about 10 miles one way. Both the manageable distance and the group motivation made the beginning easier.

When Doug applied for his position here at Ten Thousand Villages, at the end of his interview, the panel asked if he had any questions. “Are there any showers?” he asked Biking to work had become so important to him, and he knew it would be about a 20 mile ride.

Doug has since gotten into the routine of leaving a week’s worth of work clothes at the office that he can change into when he arrives after his journey (and shower). 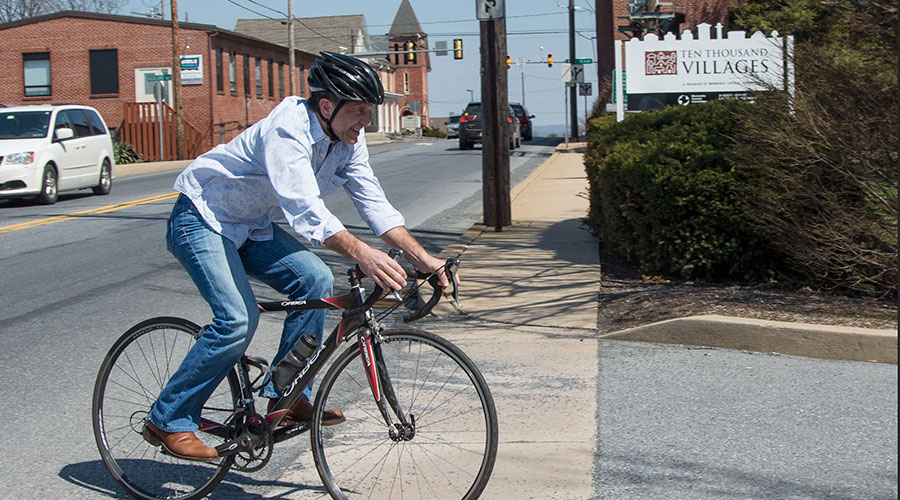 “I became accustomed to it. It would feel strange otherwise,” says Doug, referring to his biking routine. He bikes to work for several reasons. Exercise is important, but it’s difficult to find the desire to exercise after a long day at the office. “It’s much easier if you have a destination,” says Doug. The other factor is the environmental impact. If he drove back and forth to work every day, that would be 200 miles a week, and he tries to be conscious of his carbon footprint.

Doug doesn’t feel like he’s sacrificing anything to leave his car parked for days at a time.  He’s found a route that is almost entirely secondary roads and he feels that he reaches his destination feeling more relaxed if he bikes there. Keeping the body in motion is a great way to decompress on the daily commute.

“Don’t fear the gear!” says Doug. He got his first bike when he was about ten years old: it was just a basic single speed. When he reached high school, his interest in bike riding grew, so he switched to a racing style bike.

“Although expensive gear is nice, if your commute is less than 10 miles, all you really need is a helmet and a bike that works.”

Doug also strongly recommends lights and reflectors to optimize visibility. Mirrors are helpful tools to keep you aware of your surroundings. Learning to change an inner tube is also an important skill if you are relying on a bike—just like knowing how to change a car tire is important when driving.

So there you have it. If you live within a reasonable distance of your workplace that has options of secondary roads, all you need is a helmet, a functioning bike, and the desire to try. And what better day to get started than Bike to Work Day?