We drink a lot of it. In all forms. Hot, iced, blended, mocha, java, with whip, decaf, nonfat, sugar-free, steamed, dripped, extracted and pressed.

There are seemingly endless styles and methods of brewing and consuming this strange little bean. But how many of us know the basics of what coffee actually is?  And why do Americans consume so much of it? It’s time we find out. 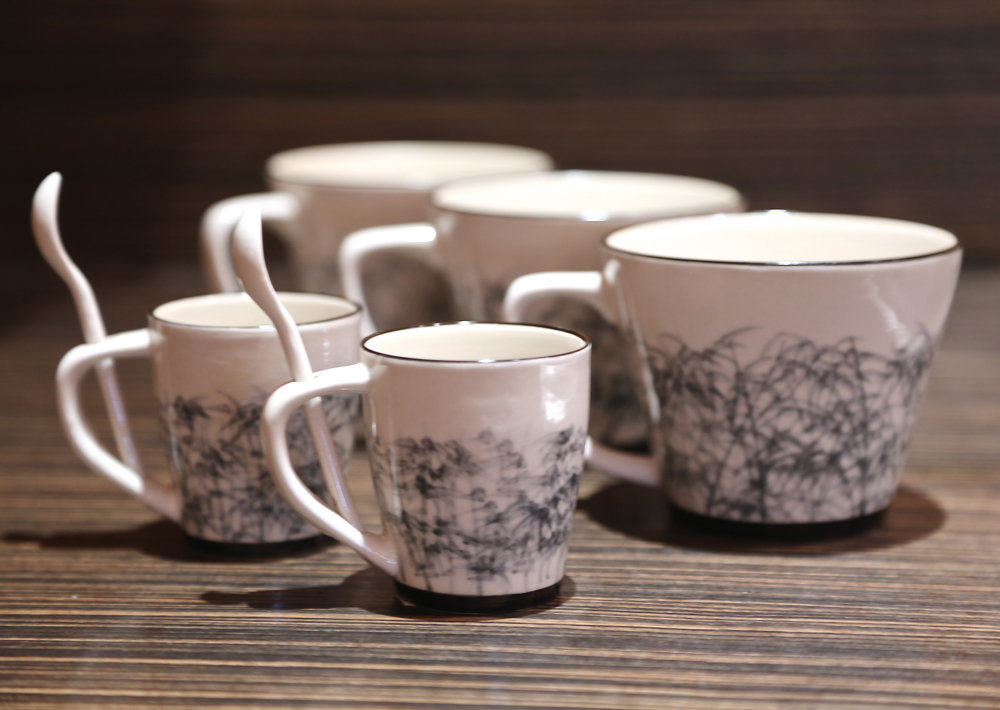 Much of the world is tea-centric. There are just as many traditions and methods associated with tea as with coffee (a story for another day), but what’s different is that tea is much easier to source. Tea is essentially just the dried leaves of plants that can be cultivated in a far wider range of climates than coffee plants. Anyone living in a moderate climate can grow any number of plants used for tea, dry them, add some hot water and that’s all there is to it. It’s no wonder that even the most remote villages serve tea as a form of hospitality and friendship.  Why isn’t this the case in the U.S.?

Remember the story of the Boston Tea Party? The story goes that after that little incident of an entire tea shipment being thrown into the Boston Harbor, tea was associated with something “un-American,” and coffee became the hot drink of choice for colonists and beyond.

Finding its origins in Africa and then making its way through the Mediterranean, coffee has won the hearts of people of all nations and creeds. From Muslims in Turkey to Christians in Italy, cultures everywhere have found a common bond in the preparation and enjoyment of coffee.

Now, let’s talk about all the different wonderful things that can be done with coffee! Starting with espresso.

Contrary to popular belief, any roast of coffee can be used to make espresso, as the term refers not to the bean itself, but rather the extraction process of using pressure to force water through finely ground beans. However, there are certain roasts that lend themselves better to this extraction than others. 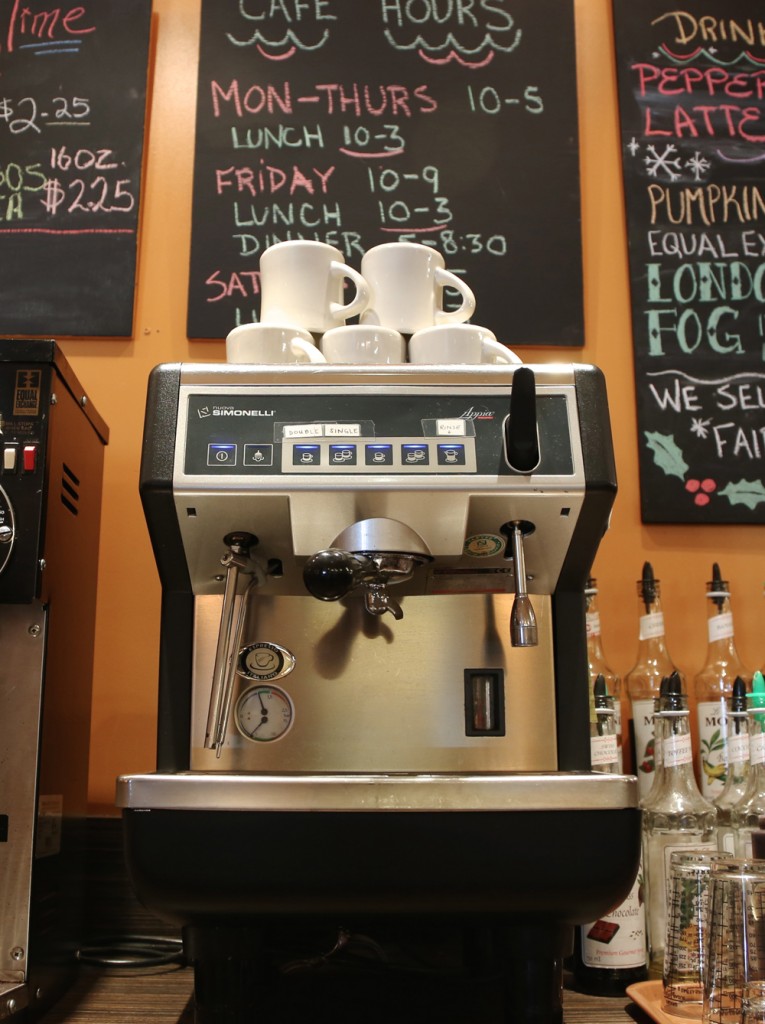 There are a few different ways to make espresso, but the most common (and the one that you’ll see at any café) is with a big espresso machine—with a steam wand, and a portafilter (or two).  The steam wand is exactly what it sounds like: a metal rod that releases steam from the tip. 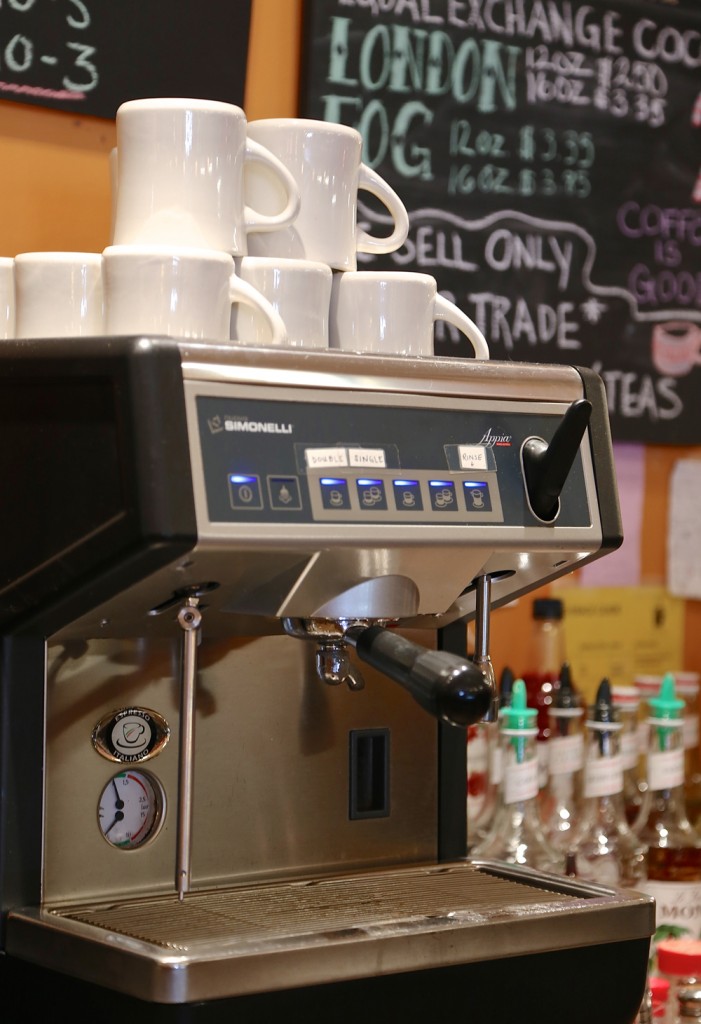 The steam wand is not used to make espresso, but to foam the milk used in lattes, cappuccinos macchiato and a handful of other tasty drinks. The portafilter consists of a metal basket with small holes in the bottom, to allow the espresso to flow through, attached to the end of a handle. This contraption is fastened into the espresso machine above a shelf where your cup sits. 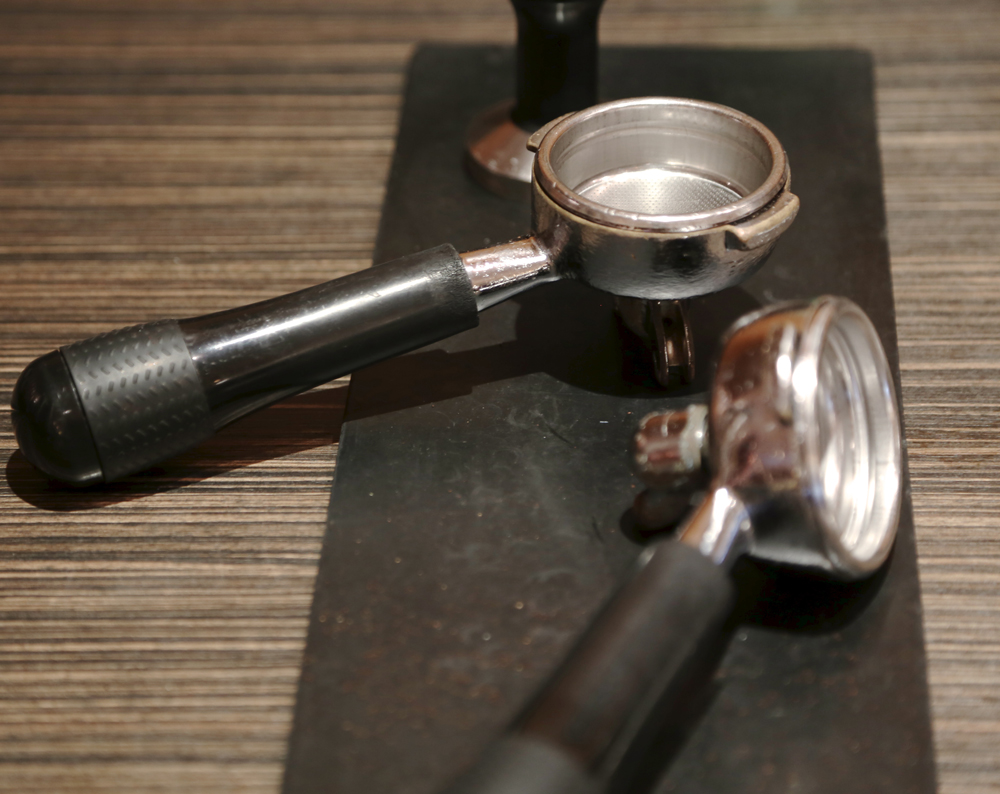 The skill of the barista plays a big role in the quality of your espresso because it’s a game of grind and time.  The beans must be freshly ground to a consistency that differs based on a slew of variables (especially, temperature and moisture in the air). Additionally, the barista will need to test how long the extraction should take by taking certain visual cues. A proper stream of espresso will be constant (not drippy or sputtering) and should flow evenly from the outside of the basket towards the center, forming a pattern known as “tiger-striping” where the dark espresso flows with lighter crema. 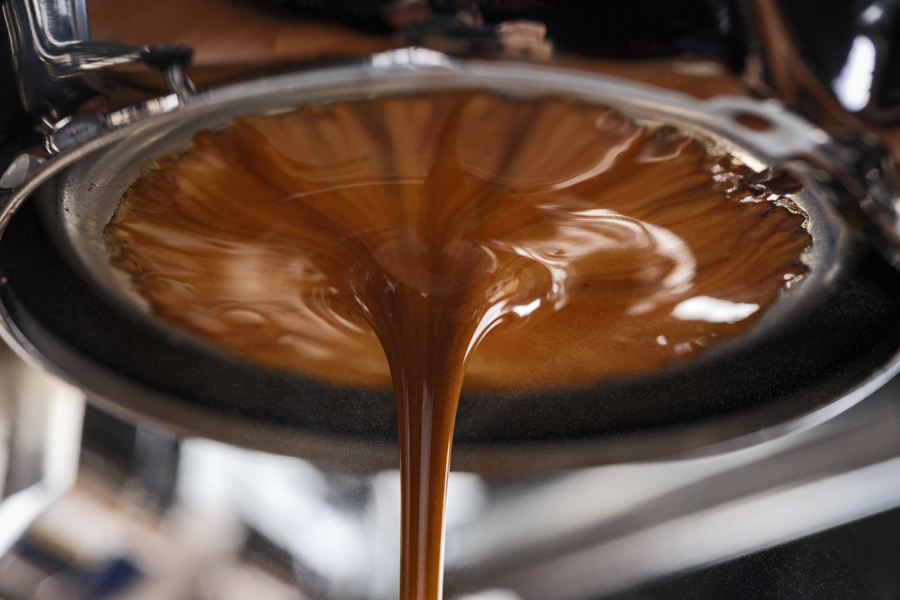 That rich dark liquid is the base for the fancy café drinks we all know and love, most of which include creamy, delicious milk. And the milk that goes into these espresso drinks is typically whole milk that is steamed until it achieves a texture called “micro-foam.” There are a number of variations on the classics, but most of the world recognizes these standard renditions:

Two shots of espresso served in an espresso cup with just a dash of steamed milk. If half & half is used instead of whole milk, it’s called “breve.”

Two shots of espresso (about one-third the total volume of this drink) served in a cappuccino cup, one-third steamed milk and the last third micro-foam. The traditional cappuccino is usually only a 6 ounce drink with a glossy sheen, no large bubbles.

Two shots of espresso (again, one third total volume) served in a 12 ounce cup with two-thirds steamed milk and a thin layer of micro-foam. 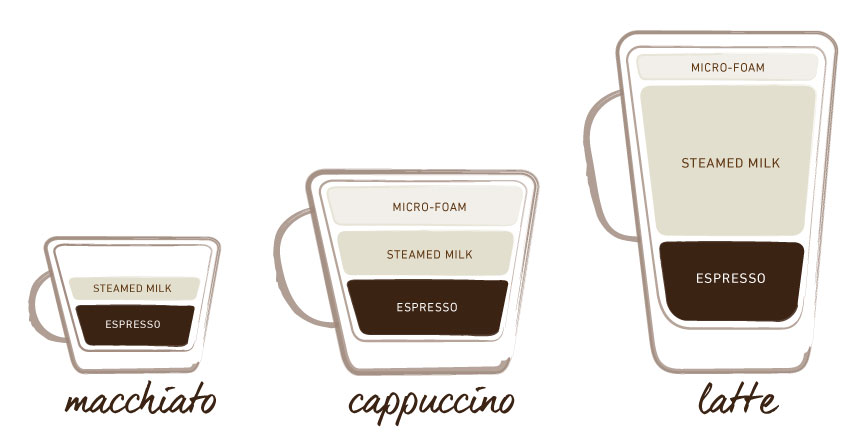 And, of course, to each of these standard drinks, there are variations—flavors and ice and proportions. The interpretations are endless. But for a classic hot drink, crafted with a commercial machine that includes milk, the steps go like this:

1. Pour your milk into the pitcher—the milk line should fall below the bottom curve of the spout.

2. Heat your cup by pouring hot water into it, and then dumping the water out again. 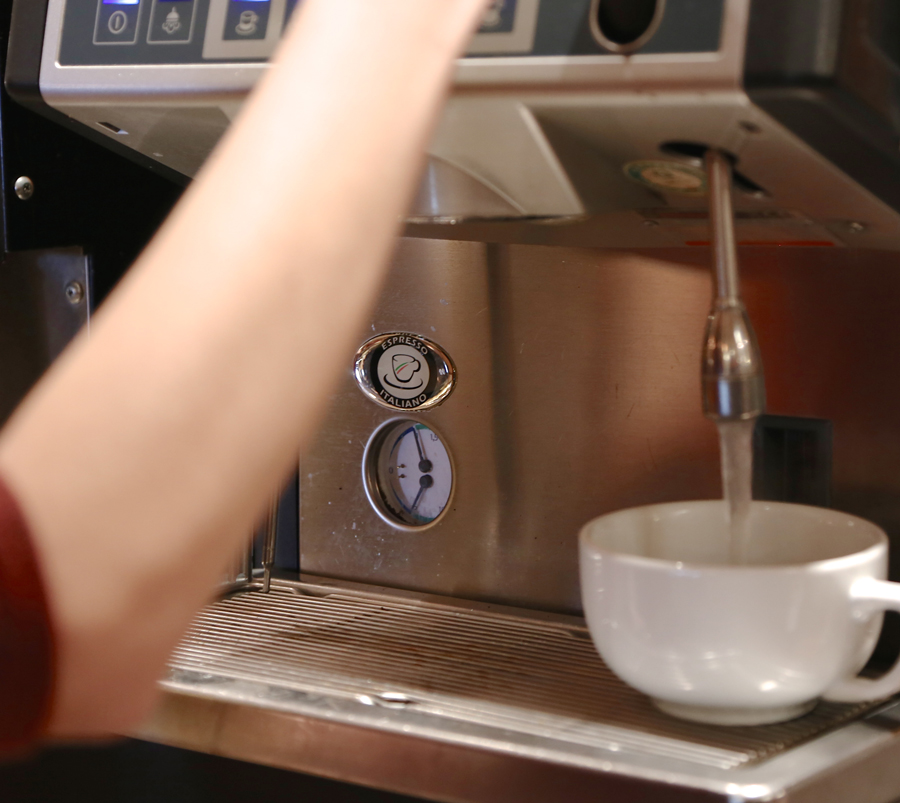 3. Grind your beans into the portafilter basket until you have enough grounds to form a small pyramid. Keeping your pointer finger straight, gently scrape off excess grinds, leveling the top of loosely packed espresso grounds.

4. Tamp the grounds:  Using a heavy, stainless steel tamper, lean the portafilter against the counter and, holding the handle like a doorknob, press the tamper down onto the grounds until they are evenly pressed. It’s very important that the surface of the grounds be level in order to ensure that the hot water flows evenly through. 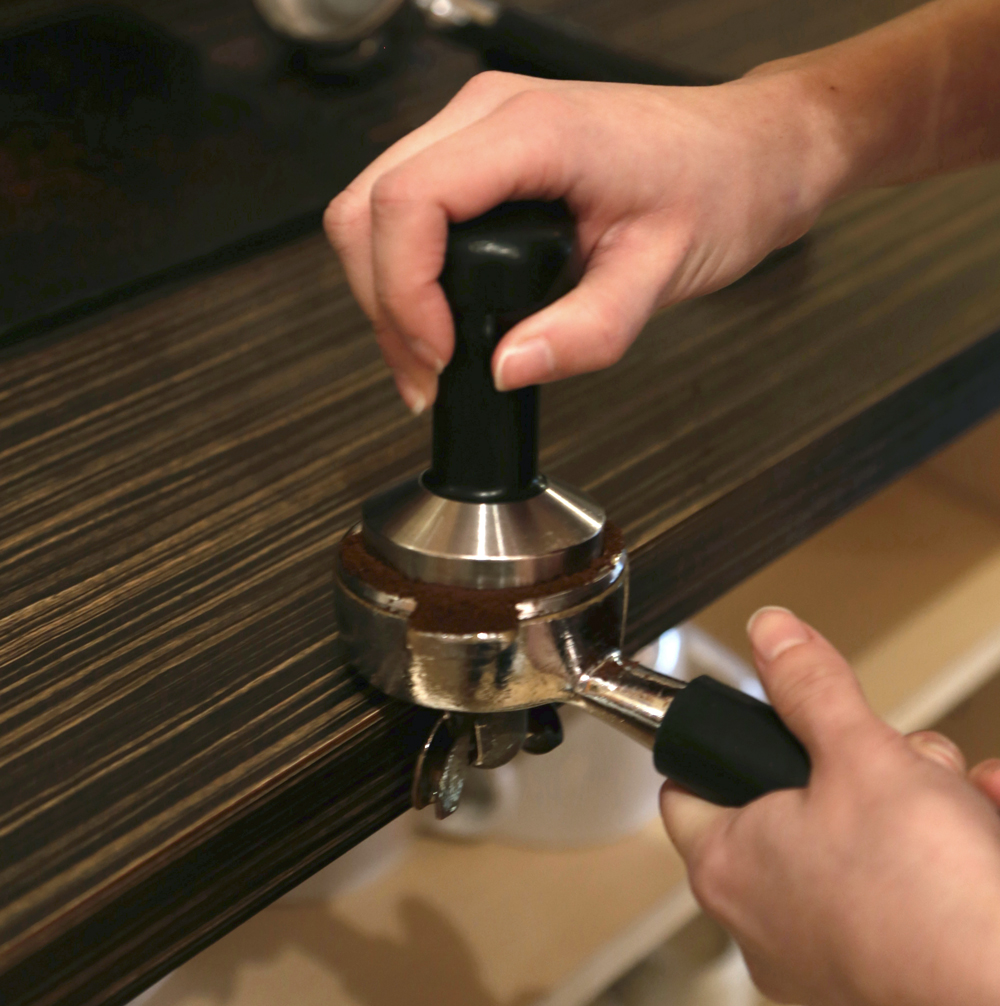 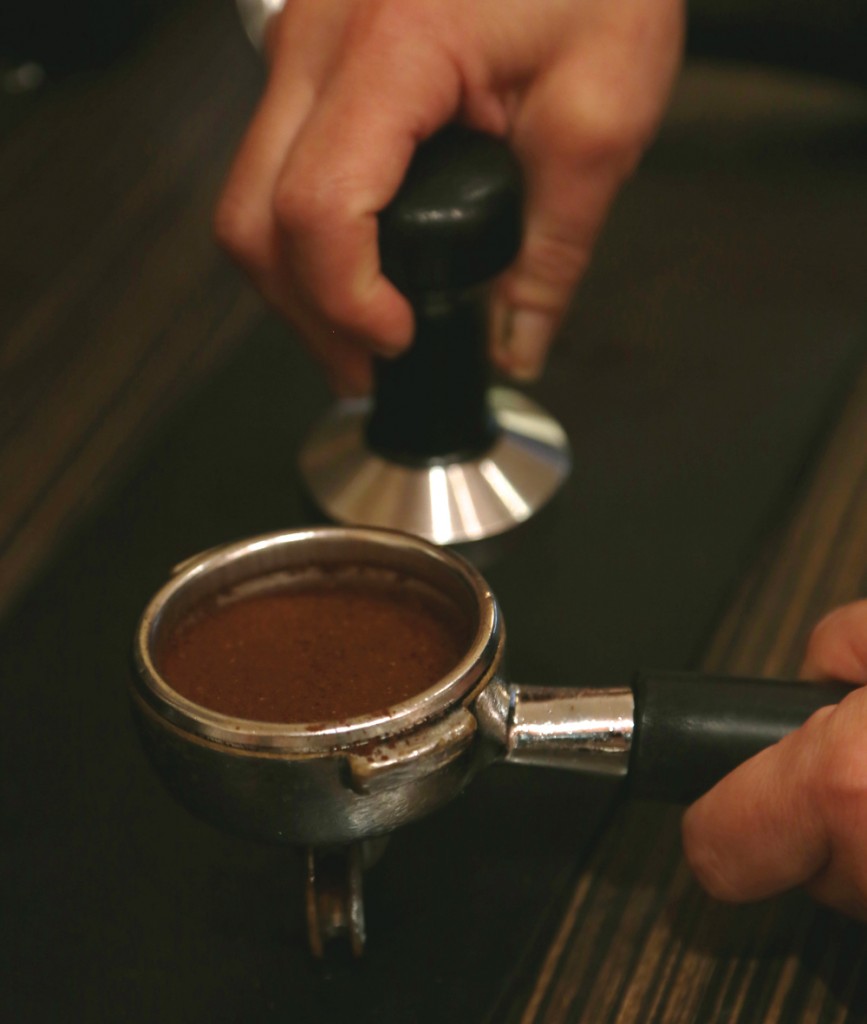 5. Fasten the portafilter in the espresso machine. Press the ON button (which will start the timer) and place your warmed cup below the stream of coffee. 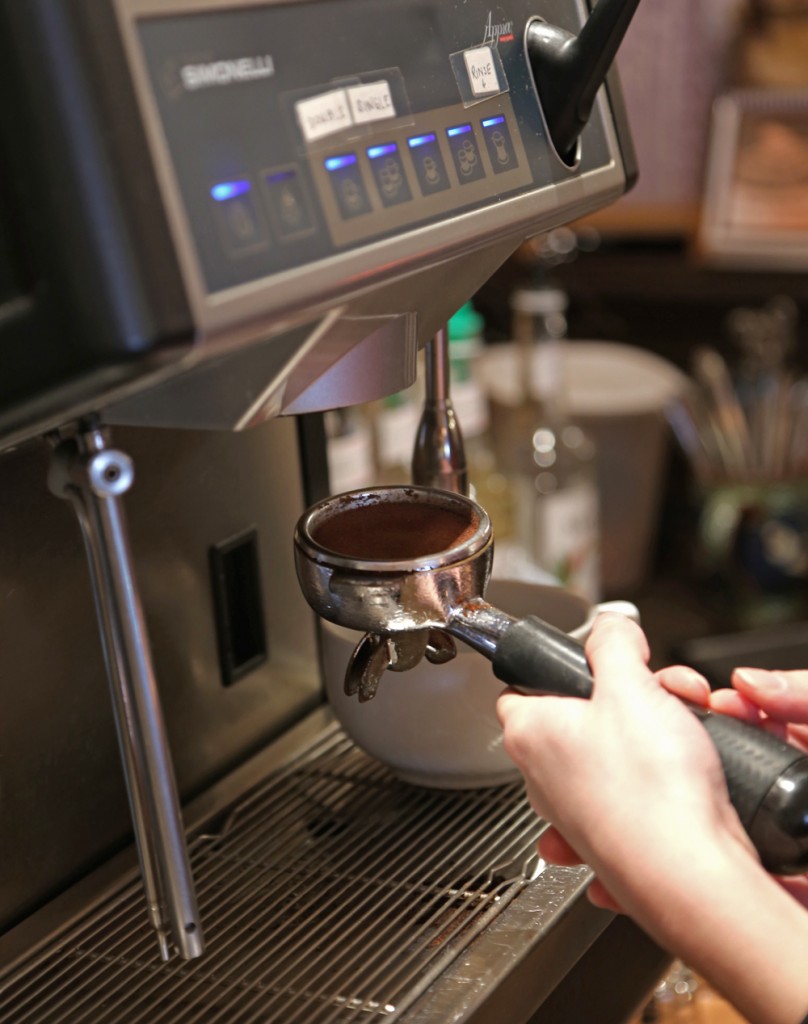 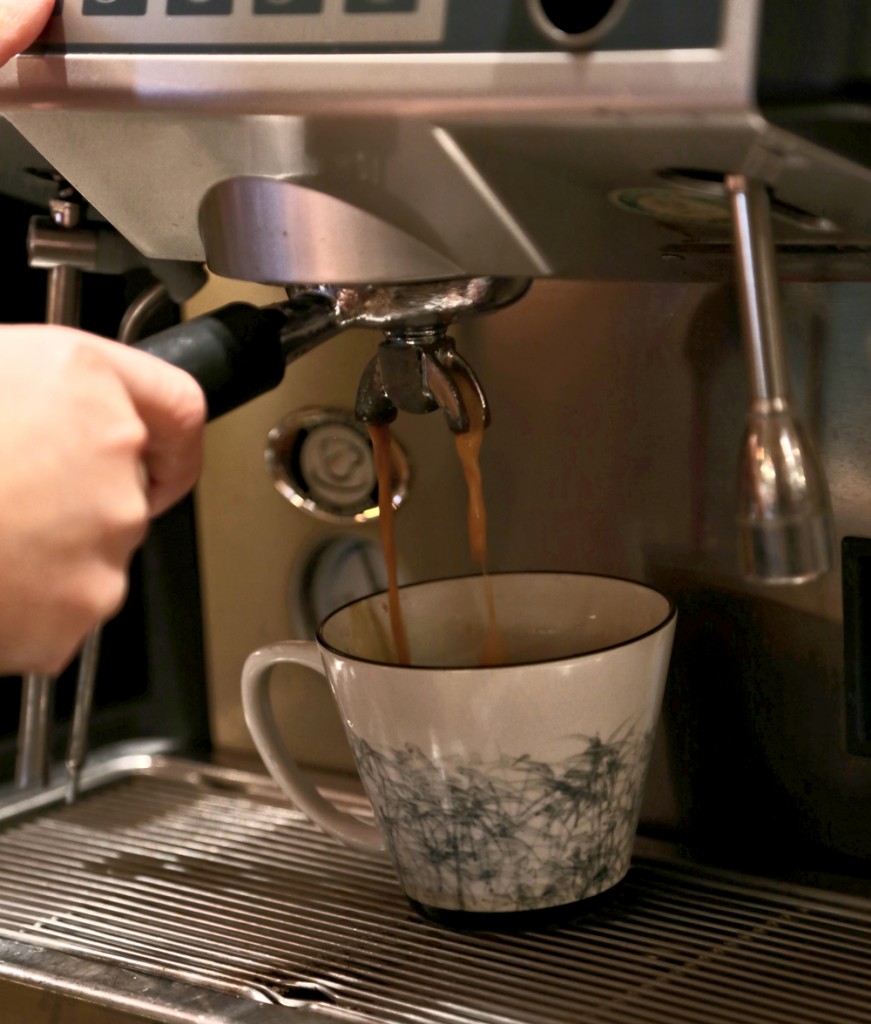 6. Purge the steam wand by blasting it at full power. This releases any unwanted water that may have built up since its last use.

7. Steam your milk by holding the pitcher at an angle, submerging the tip of the steam wand just below the surface of the milk and blasting steam at full power, achieving a vortex in the milk, and all the while, keeping an eye on your espresso (which should not flow for more than 30 seconds, often less). 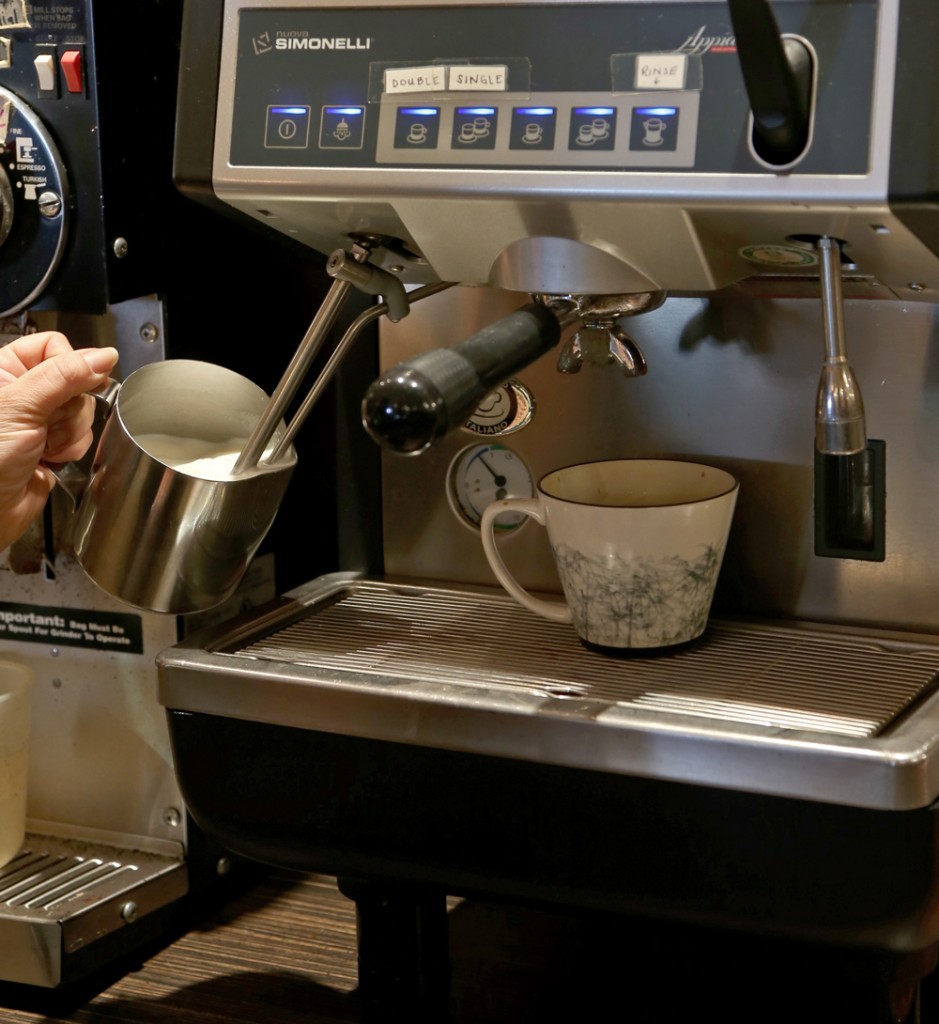 8. Milk is properly steamed when the pitcher reaches 150 degrees. A skilled barista will have a sense of the temperature by holding the outside of the pitcher with the palm of their hand. Turn off the steam and remove the pitcher.  Wipe the wand with a clean, damp cloth, and purge again to clear the wand of any unwanted milk sugar that could be left behind. Swirl the milk to reach an even consistency (it should look like wet paint). Gently tap the base of the pitcher against the counter to release any large air bubbles. 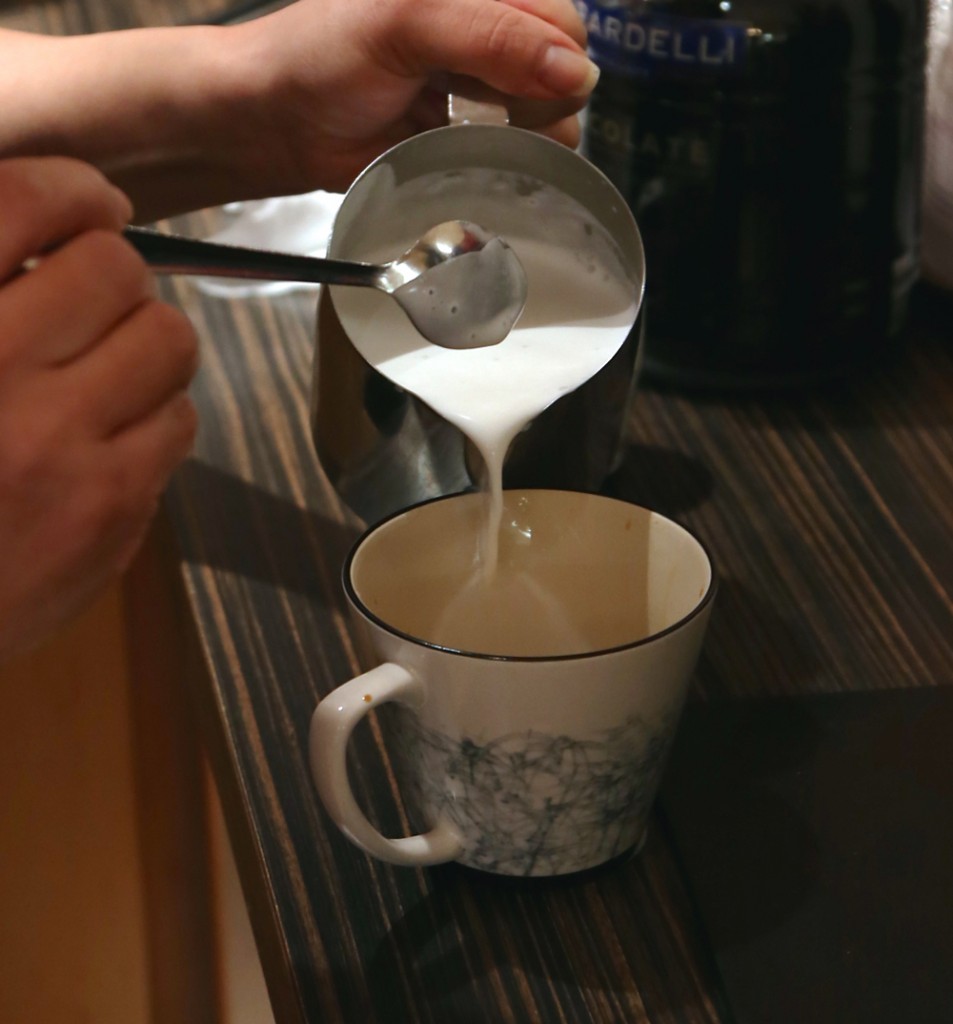 9. Now you’re ready to pour! Tilt the cup of espresso slightly and in a thin, even stream, begin to pour close to the surface of the coffee, slowly lifting, shaking the stream from side to side.  Pull the stream of milk through the center of your squiggles to form the desired design in the surface of your drink.

Creating the perfect espresso drink truly is an art that requires multi-tasking, careful attention to detail and lots and lots of practice. 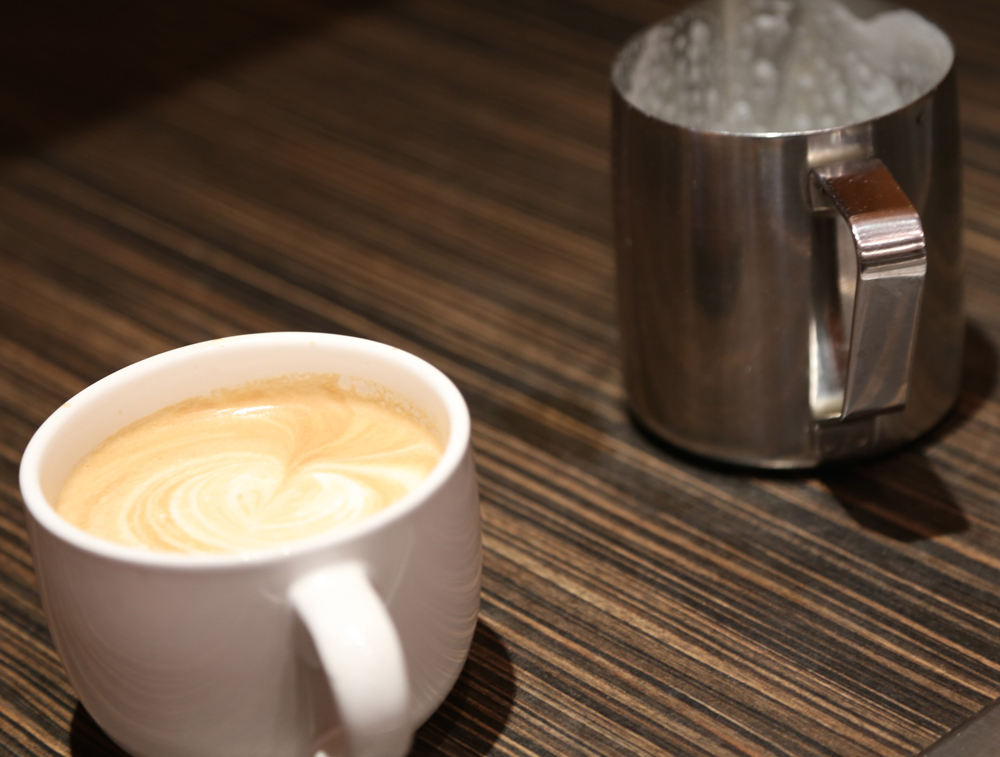 There are high-quality espresso makers available for home purchase but they can be expensive and take up a lot of counter space. A less expensive option would be to purchase a stovetop home espresso maker, which is typically made from stainless steel, in the shape of a pitcher. These work much the same way as a commercial machine, but the main difference is that the steam pressure builds from the bottom and forces water upwards through the coffee grinds, rather than flowing downwards. This machine has three compartments: water at the bottom, grinds in the middle, filter and empty space at the top, where the espresso ends up. As the bottom of the pot heats on the stove, pressure forces the water up through the grinds… it’s the same extraction that happens inside a commercial machine, only it works upwards rather than dripping down. Finely ground beans are still necessary, but they do not require tamping.

It is also possible to steam milk at home! There are small battery-operated whisks available for home purchase. Simply heat your milk in a small pitcher, tilt at an angle and insert your whisk to achieve a vortex until the desired consistency is reached. Tap and swirl as you would with regular steamed milk. And there you have it!

Whether you’re a home barista, or prefer the social routine of visiting a local café, espresso drinks are a great way to start the morning, provide an afternoon pick-me-up, or serve as a well-earned reward at the end of a hard day. 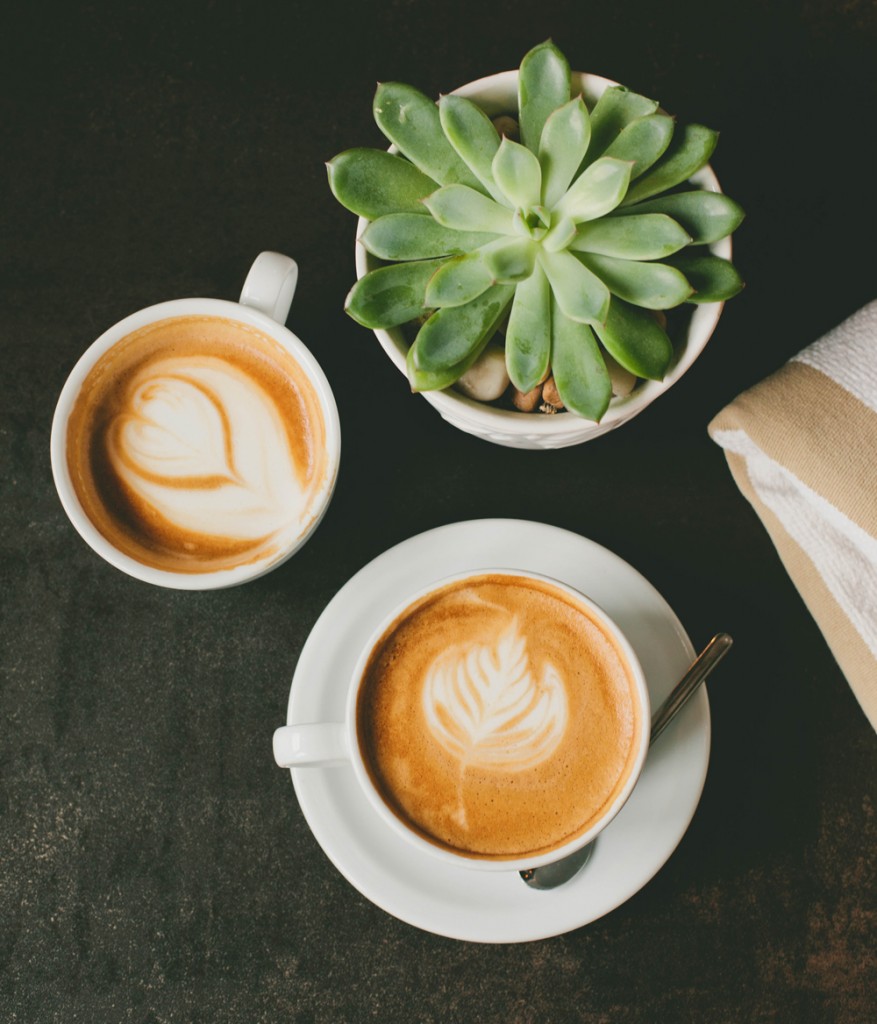 READ NEXT: Coffee – From Beans To Brew