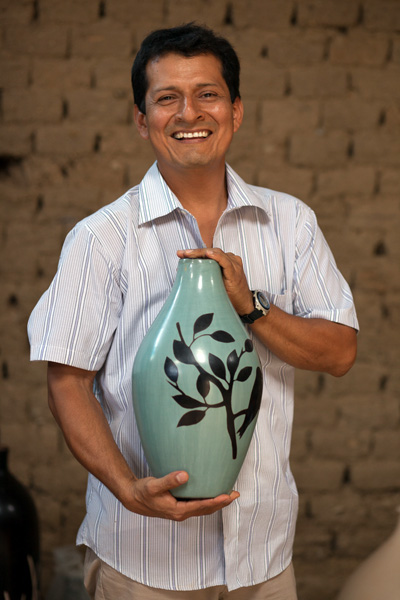 The Village of Chulucanas is very poor, but filled with bright and vibrant people. Alex Sosa comes from a family of potters. His uncle, Jose Sosa, took Alex under his wing at the age of 25, and taught him how to be an amasador or “kneader.” From the beginning, Alex enjoyed working with clay, and is especially fond of developing colors.

Over time, he learned about shape and design—skills needed to eventually establish his own venture by doing 50 pieces a month out of his house. If he received an export order, his production jumped to 500 pieces a month, but because the export company was not fair trade, he was paid a very low wage and struggled to meet financial needs.

In 2004, he built a simple workshop on his father’s land, and began working with Allpa—a fair trade exporter that has been selling products to Ten Thousand Villages since the late 80’s. He was able to renovate in 2008, after receiving a 1,500 piece order from Allpa. The new workshop was built with open air windows and is comfortable inside. He believes that fair trade helps him, especially because of the commitment to long-term relationships. Without fair trade, Alex’s workshop struggled to find enough orders for his ceramic products, but now that he has consistent work to rely on, he can focus on expanding his business even further and enjoy time with his family. 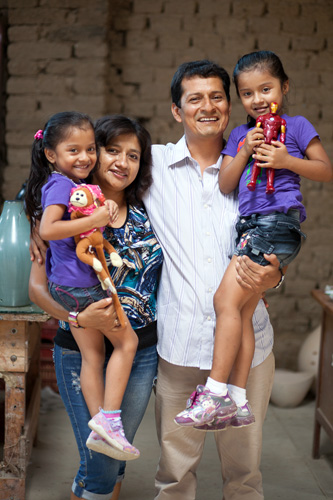 Alex tries to balance the work for his employees. For example, if they are doing large pieces one day, the next day they work on smaller pieces. The labor is very intense, especially as an amasador working in the hot sun. On average, Alex employs 15 people. During the busiest times, he will employ 30 people who are paid per piece.

He and his wife (who is a midwife by profession) grew up in the same neighborhood and were high school sweethearts. They have 5-year-old twin daughters who come into the workshop on Sundays to paint clay forms he molds especially for them; they are very artistic. Alex hopes that his children will someday follow in his footsteps, just as he carried the legacy of his ancestors who came before him.