We have all enjoyed pumpkin pie. Usually, it comes neatly tucked into a plastic container, with a tin to keep the crust intact. But how many of us have ever made a pumpkin pie from an actual pumpkin? Not very many. (Let’s admit it.) Well, a group of us set out to change that and to document the event. 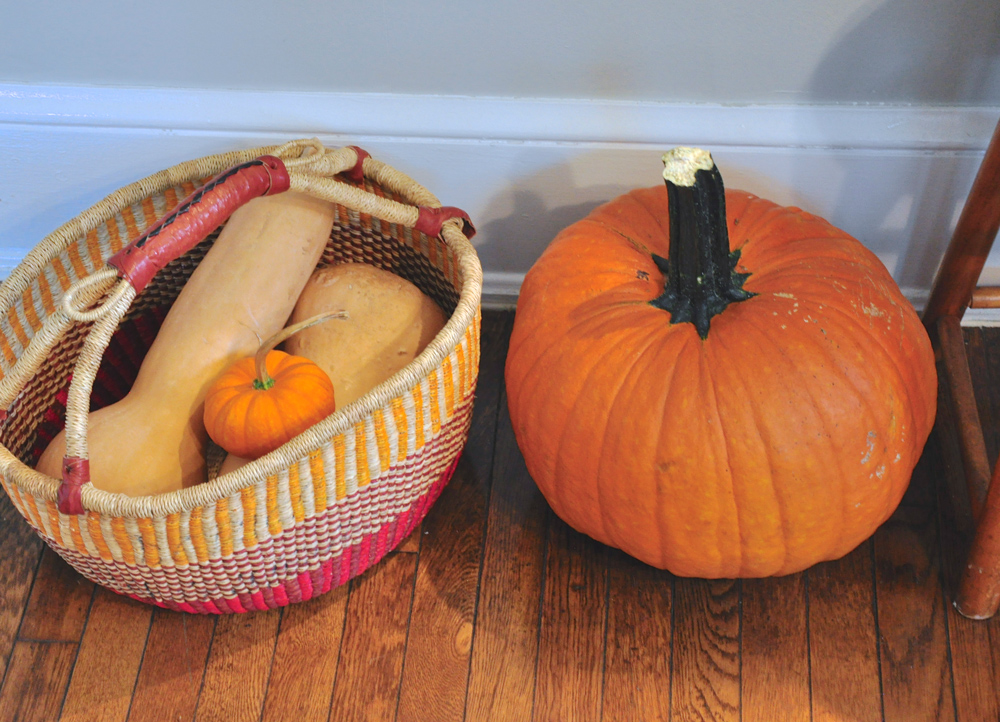 Apparently, it’s a tradition to use neck pumpkins when creating a pumpkin puree. One of our more experienced colleagues even went to the trouble of providing us with a few neck pumpkins for use in this project. But when we saw them, we felt perplexed; they looked exactly like butternut squash. And since we were writing a story about pumpkin pie, we got ourselves a regular round and orange pumpkin. 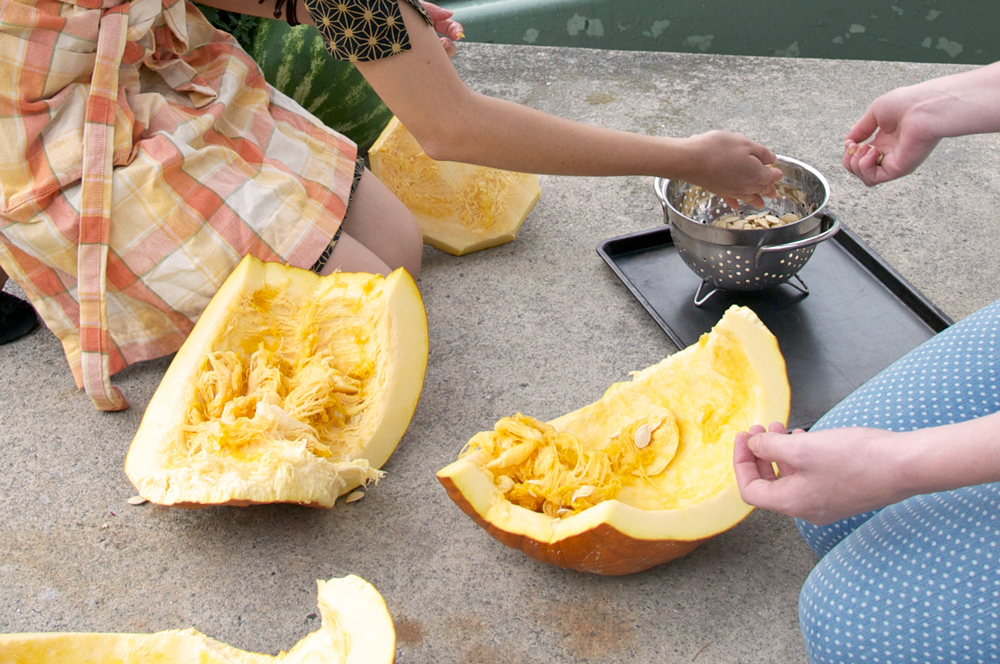 The regular pumpkin worked well for some photos. But when it came to actually transforming the thing into puree, we ran into some challenges. It was so huge that we had to go outside, just so that the guts wouldn’t get all over the house. Pumpkin insides are a messy business, but it’s important to save the seeds. We might not have experience making pumpkin pies, we certainly do have experience making jack-o-lanterns, so we know that pumpkin seeds are yummy! 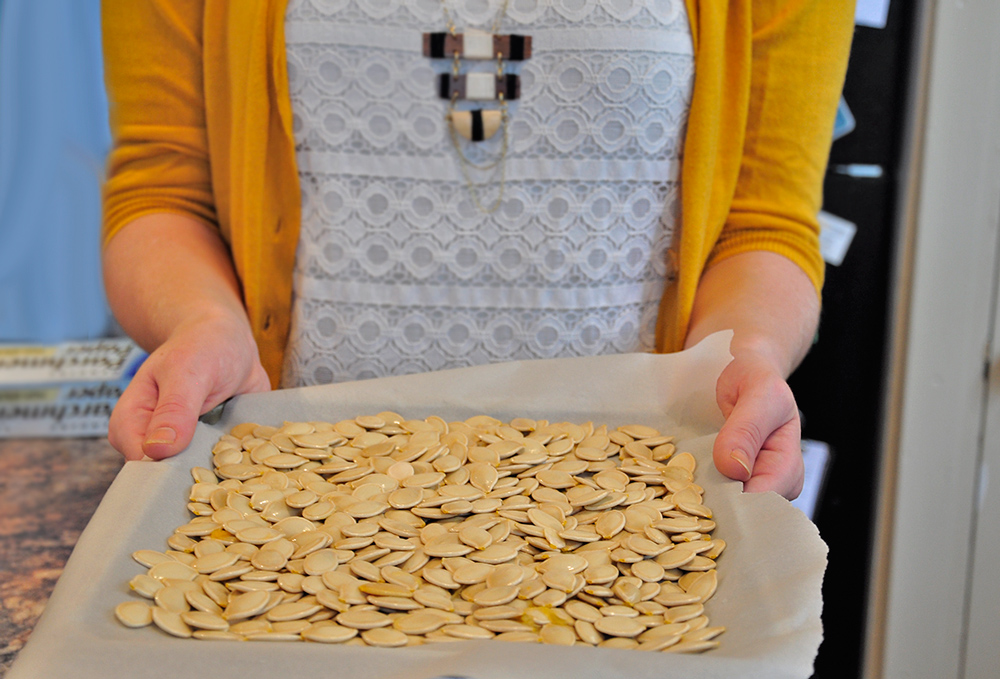 A little bit of garlic powder, cayenne pepper, and salt and we had some pretty tasty seeds on our hands. We might even go so far as to say that they were the best part of the pumpkin-dismantling process. 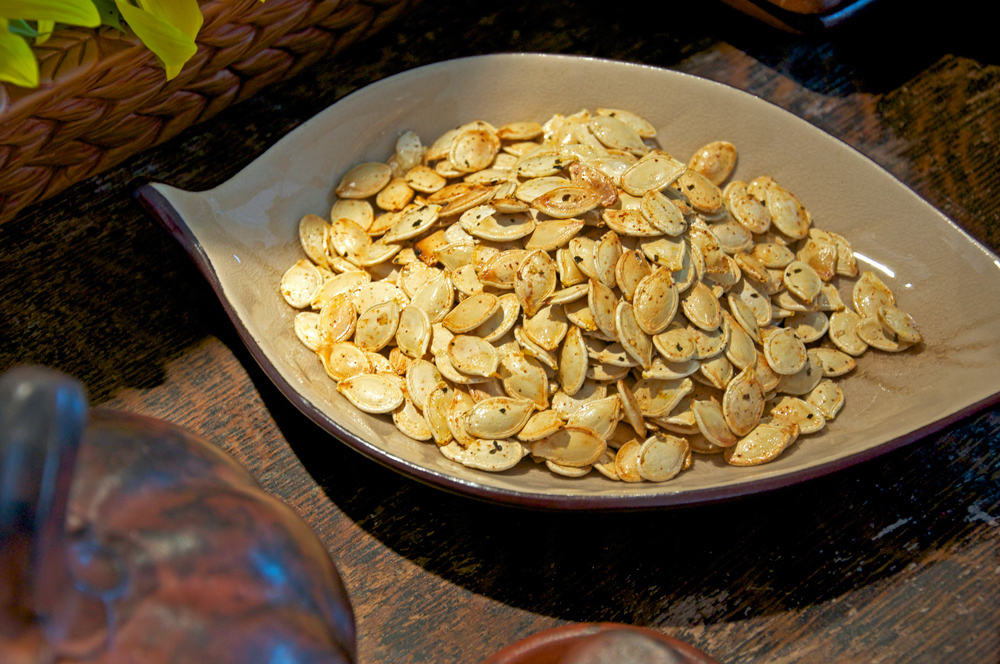 Cramming all of our pumpkin segments into the oven was a puzzle, but we did it! 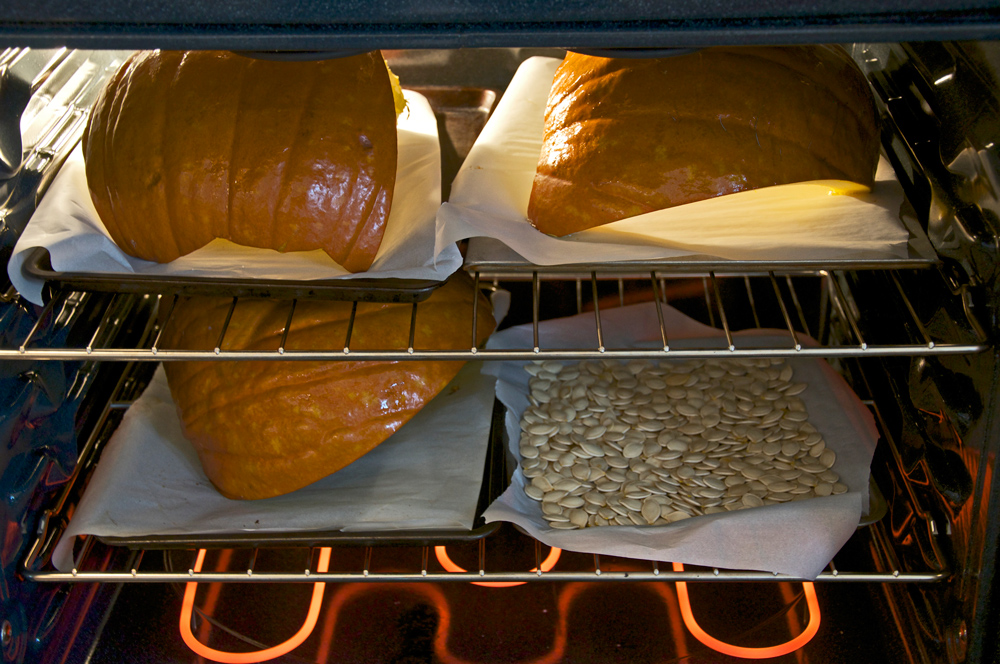 And while the segments were baking (for a whole hour), we worked on the crust: 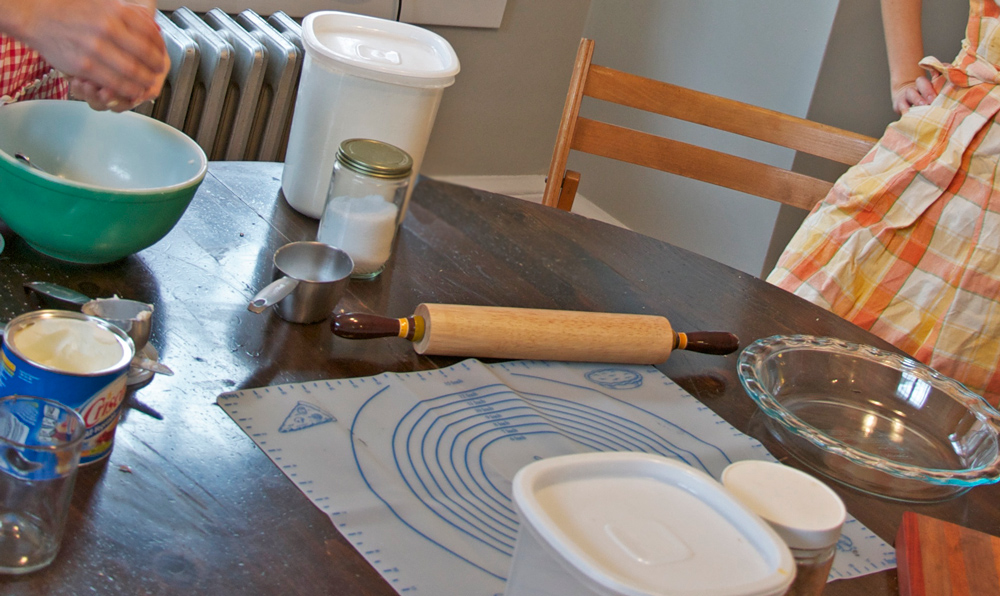 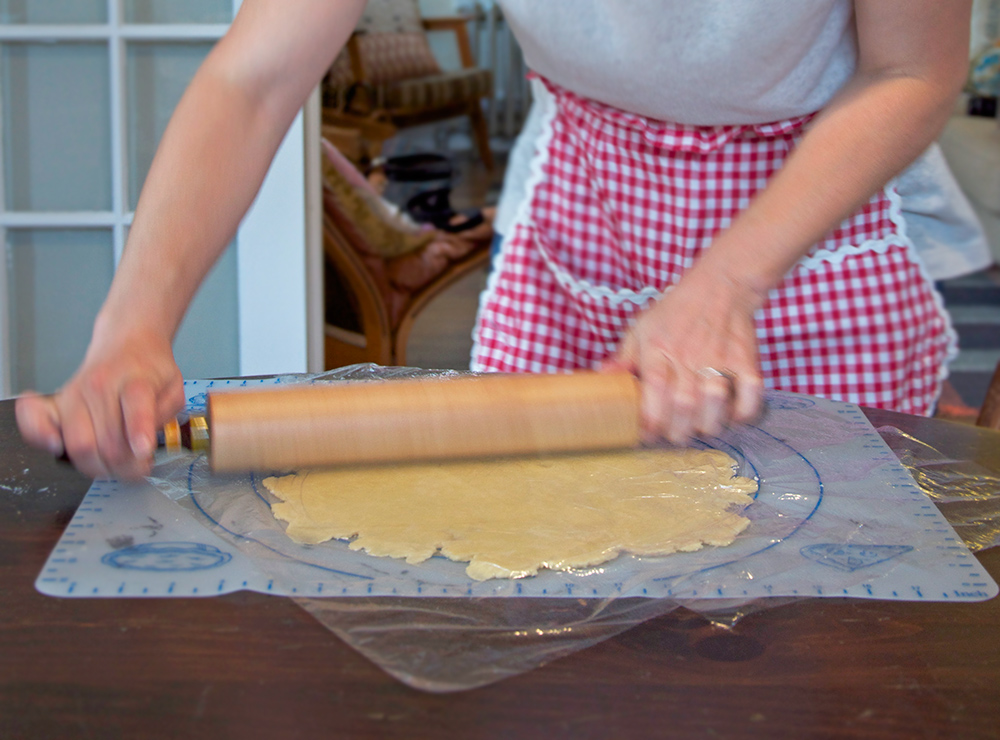 Luckily, someone in the group had some knowledge of the pie-crust craft and was prepared with a silicone pastry mat and guidelines for measuring out pie crust. (Because pie is science and must be measured.) She also knew that if the crust started to stick to the rolling pin, laying some plastic wrap on top of the dough would allow us to roll it super thin without any cracks. 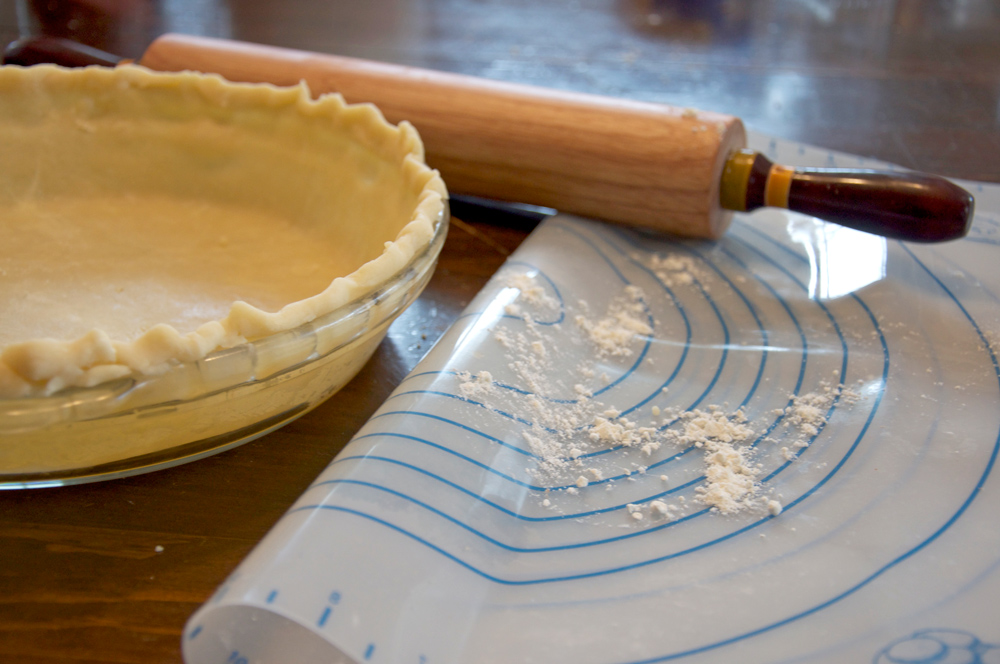 When it came to making the pumpkin parts into puree, the recipe told us to use a food processor, but we wouldn’t have been able to fit all of it into a teensy food processor… and washing such an apparatus can be annoying. So instead, we scraped our pumpkin pulp away from its shell, put it all into a big pot and got at it with an immersion blender—which seemed to work nicely. When it was all said and done, we had enough puree for about six pies. After realizing we misread a recipe and accidentally making a double batch of filling, we were feeling a little bit silly. But resourceful us! We put the leftover puree (and half the filling) into plastic bags for the freezer. Now we’re all set for Thanksgiving and Christmas (and then some). 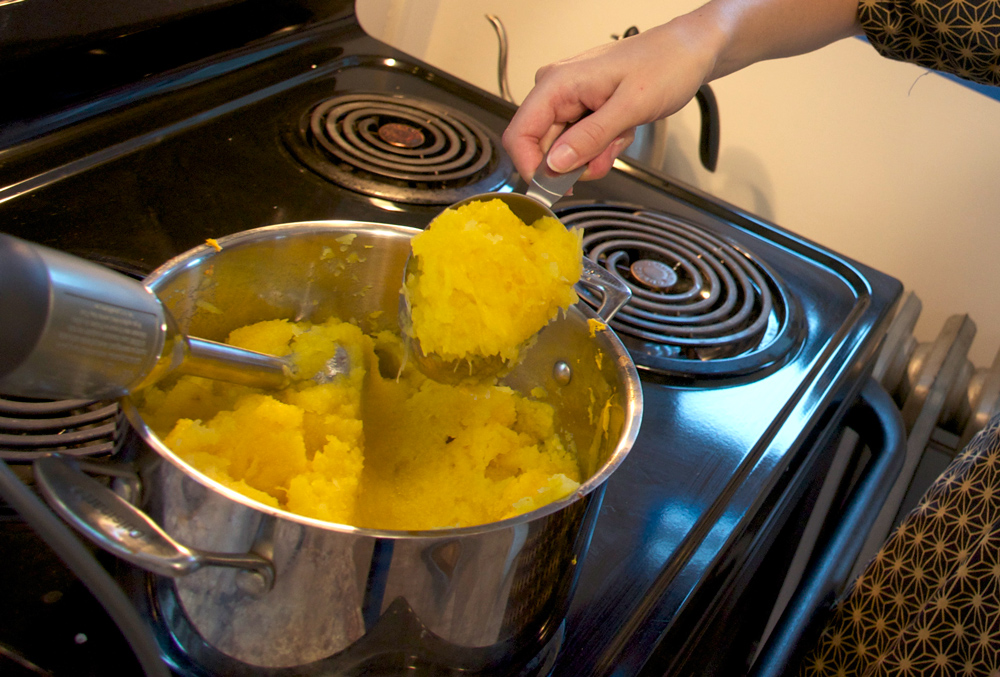 Here’s how we made the filling:

And because we are rebels, we also added ground nutmeg and clove to the filling, even though it was not called for. 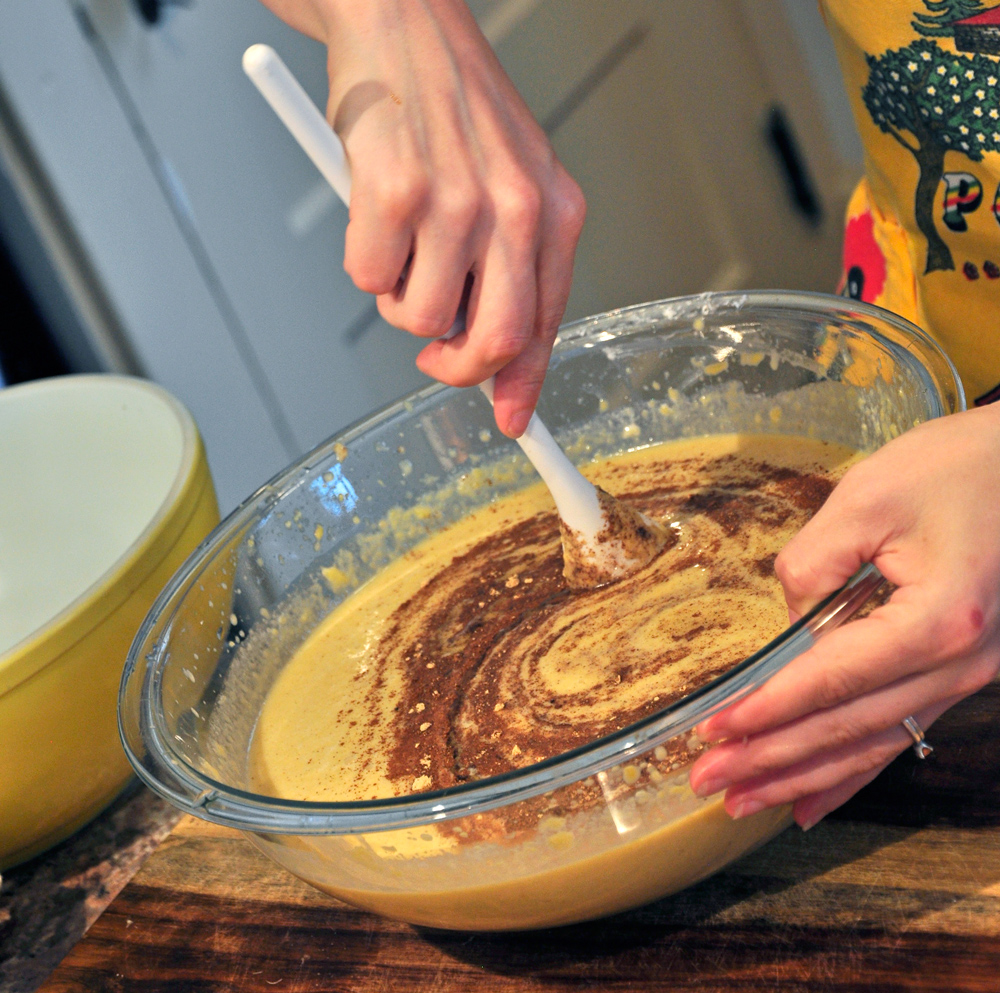 Now, don’t make the same mistake we did! Those proportions above are enough for TWO pies. Which, if you’re going through all the time and effort to make a pumpkin pie from scratch, you might as well make enough for two and save some for later. 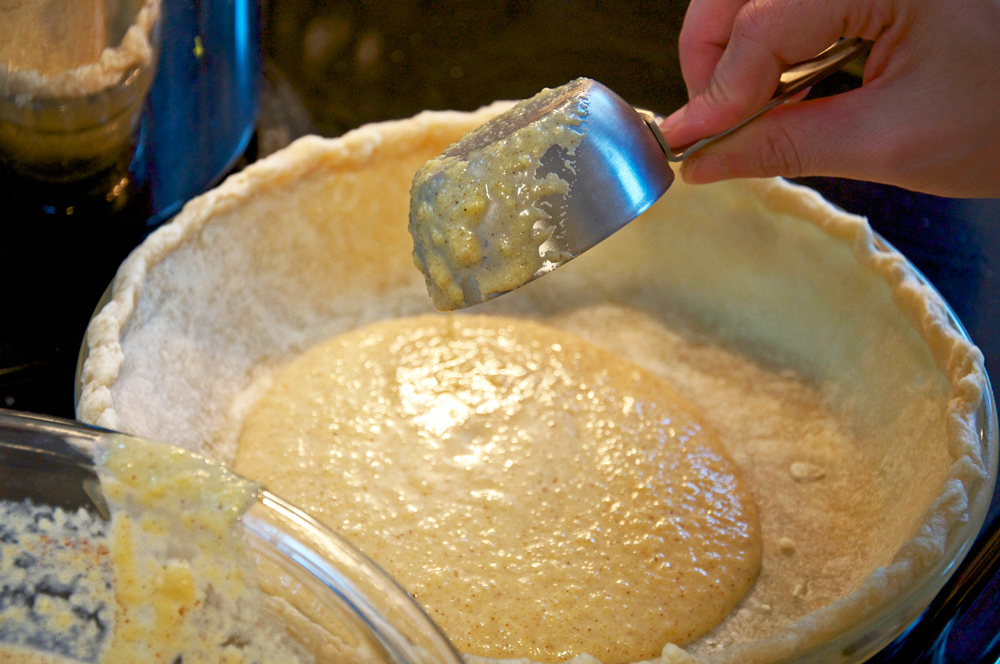 We poured the filling into the crust and baked until it was set in the center (about 1 hour). We let it stand out on the counter until it was room temperature (about 30 minutes) and then it was ready to eat. 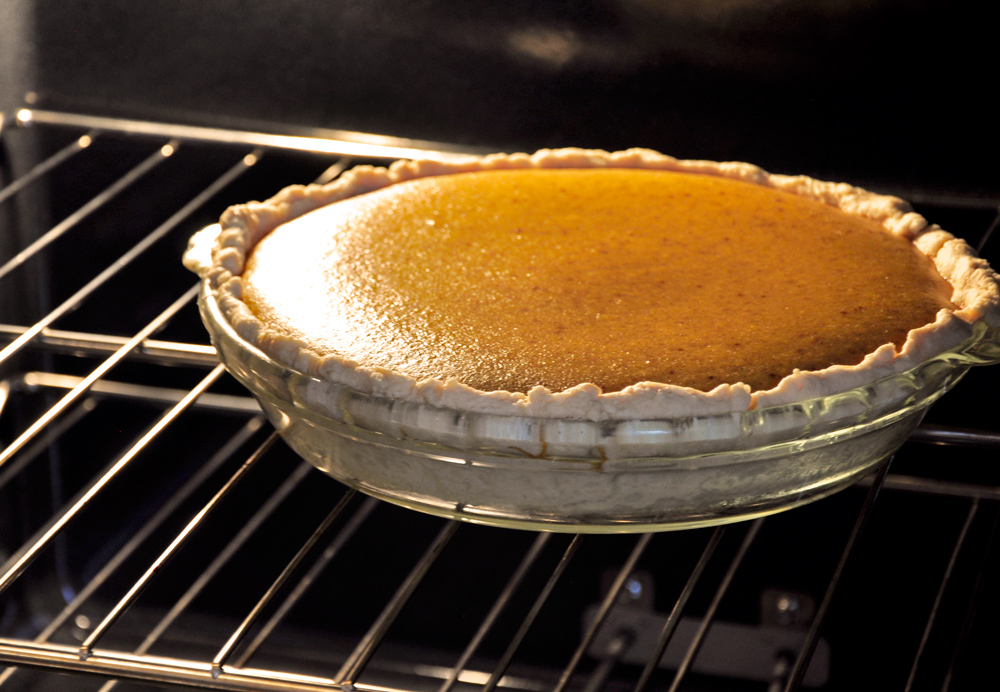 As for presentation, everybody knows that pumpkin pie is nothing without whipped cream. We didn’t have any of the canned stuff to make a nice design. So instead, we put whipped cream into a plastic bag and cut the tip (like you might do in cake-decorating). This technique yielded a nice dollop that very closely resembled a ghost. 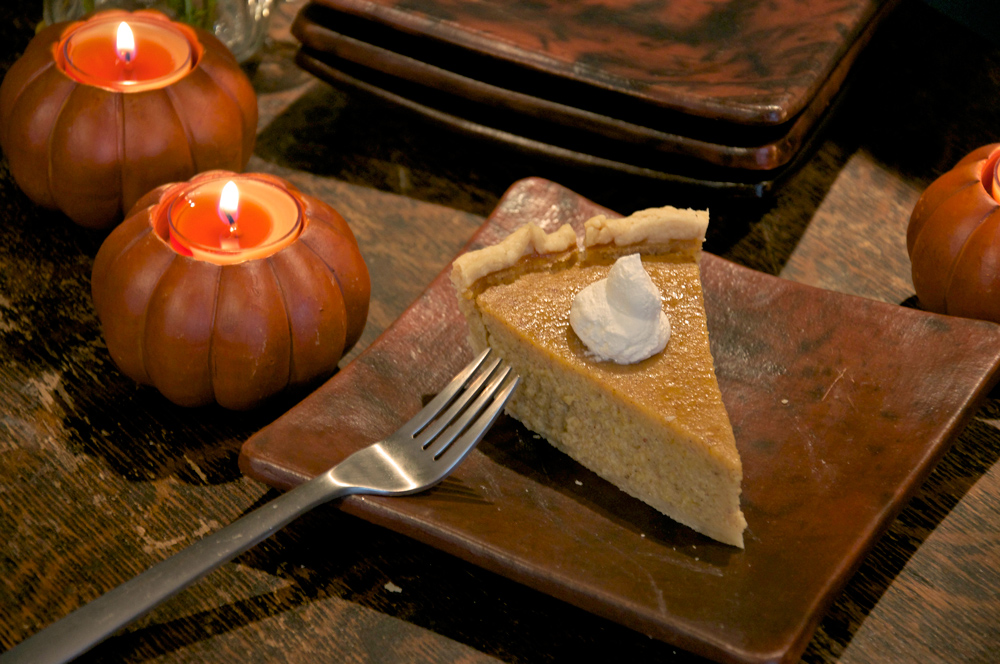 And then we ate it! 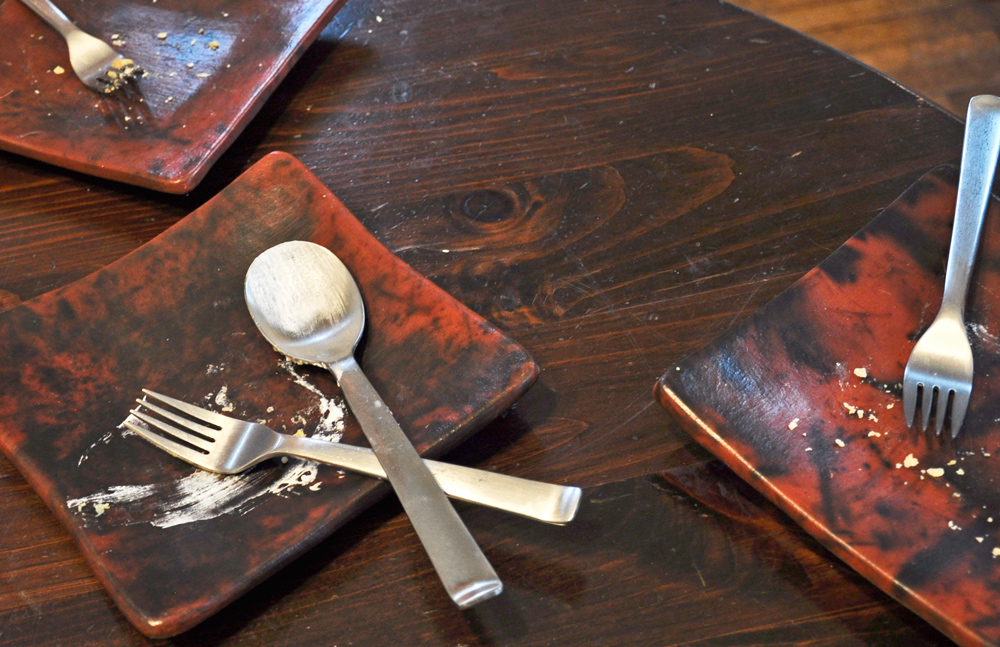 Overall, the verdict was that making a pumpkin pie from scratch will take all day. And the end result was so-so. But now we know that if you’re going to take a shortcut this Thanksgiving, the pie is definitely the place to do it. There is no shame in the store-bought stuff. Or even if you’d rather use canned pumpkin puree instead of baking an actual pumpkin, that would help. But if you’re bored and want to scratch “bake pumpkin pie” off your bucket list, by all means, give it a try and let us know how it goes for you! 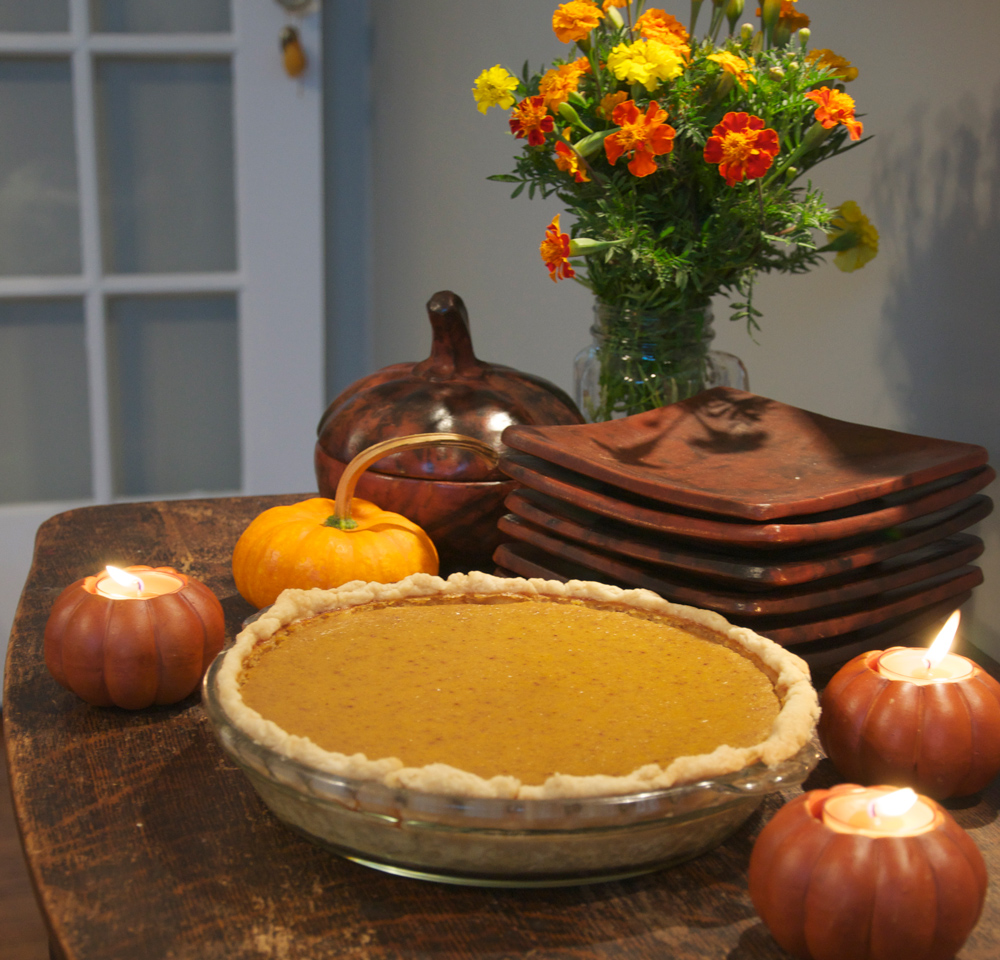 Would you like to debate with us about the proper way to handle pumpkin pie? Leave a comment below!