The women at Uganda Crafts use raffia, the fibers of locally grown palm leaves, wrapped around long strips of banana leaf stems, to make beautiful baskets in a seemingly infinite number of colors, designs and sizes.

Their work is a unique blend of modern design and traditional skill; basket weaving is a craft that has been passed down from generation to generation.

Like their mothers and grandmothers, they weave at home while caring for their families. But these women are earning a sustainable income for this work, giving their families opportunities that they didn’t have.

“Women are being empowered. Their lives have changed tremendously. Most of them were so poor … now their children are going to school. They have built up houses. I think they are living a happy life.” says Betty Kinene, the founder and leader of Uganda Crafts.

Betty knows the road these women have traveled through hardship. In 1983, Betty was a single mother with a physical disability and no income for herself when she teamed up with a UNICEF worker to help other women lacking opportunity. Together they started Uganda Crafts, a small craft shop run as nonprofit, employing and supporting women – including and especially single mothers, widows and people with disabilities.

Ten Thousand Villages started purchasing baskets from Uganda Crafts in 1995. The next year the group became a private organization, seeing a successful future in the fair trade export market and believing they could use their business model to sustain themselves, rather than relying on donations to subsidize their costs.

It has become a member of the World Fair Trade Organization, officially committed to and recognized for the ethical principles that were at the heart of its founding. Betty and the artisans of Uganda Crafts have earned a reputation for excellent craftsmanship and business practices.

Ten Thousand Villages CEO Carl Lundblad visited Uganda Crafts last year and noted not only the skill training and processes in place that ensure a well-crafted basket, but “the dignity and respect that result from engaging with makers as a mission-aligned business, not as a ‘charity.’”

Still, it was Betty who left the greatest impression on Carl.

“Betty is a polio survivor, and when she tells the story of her life and Uganda Crafts, she says, ‘Now, I stand on my own.’ “

That is courage. That is independence. That is strength.

On International Women’s Day, Ten Thousand Villages celebrates the strength of Betty, and the strength of women everywhere. We see it all around us – in what our partners do and in the products they make. When artisan women make baskets, they choose durable, resilient materials—natural grasses and palm leaves. By bundling, wrapping and weaving them together, they make something even stronger, something that carries weight.

Each of us can make a difference; our impact increases exponentially when we work together. Together, we can carry something. We can carry the weight— the weight of our mothers’ hopes and children’s fears, of our own worries, of our own dreams.

Every woman has her own strength. 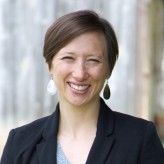