In Bangladesh, less than 60% of the adult population can read, and only a small fraction of those who can are women. With education an unobtainable privilege for most Bengali women, many turn to the sex trade to support themselves and their families. Sacred Mark, a workshop of artisan group Prokritee, is working towards changing the lives of these women who have few opportunities for sustainable employment.

Women who have experienced the unimaginable pain of victimization and abuse are provided counseling, plus training and employment in soap-making and textile work, including handicrafts made from recycled saris.  The name “Sacred Mark” was inspired by the words of Nobel Prize winning Bengali poet Rabindranath Tagore, whose poem Gitali 34 powerfully describes the transformation from disgrace to new life.

“Sacred Mark is not just about providing jobs, Sacred Mark is a holistic approach to life—taking care of every aspect of women who have come from a life of abuse.” –Ishrat Jahan Deepa

Ishrat Jahan Deepa, co-founder of Sacred Mark, explains some of the challenges she has faced in her efforts to help these women. In one instance, she tried to rent a larger space for the workshop, but was turned down by the owner of the building who thought she was trying to open a brothel. It was only after several meetings that the landlady began to understand the goal of Sacred Mark, and has since become proud to support the efforts of the group.

The tragic factory collapse that devastated Dhaka, Bangladesh reminds us that safe workspaces are just as important as fair wages when it comes to fair trade. 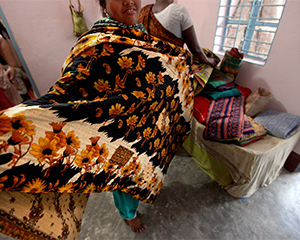 Artisan groups like Prokritee make safety a priority for the people who work hard to earn a living. Some groups even allow artisans to work from home, eliminating the risk of commute or the worry of finding affordable childcare services (which is unavailable in many cases). 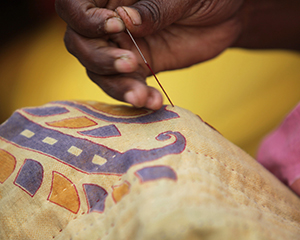 The word “sari” is derived from a Sanskrit word meaning “strip of cloth.” The traditional garment of South Asian women, the sari can be worn in more than 80 styles which are largely determined by region. Typically wrapped over a blouse and petticoat, the sari can be worn for formal occasions, or in certain regions, as every day wear.

All of our sari products are special because each is unique in both pattern and stitching.

With different patterned saris on each side, duvet covers can be thought of as “reversible,” and flipped to change the look. These blankets will certainly add a sense of global sophistication and authenticity to the bedroom.

Soft to the touch and bright to the eyes, the Kantha Stitch Sari Bag is large enough to be an overnight bag, yet lightweight enough for everyday use.