In the dead of a summer’s night, a candle flickers. It illuminates the hibiscus and the lotus. While tigers sleep, insects have their fun. Nocturnal eyes watch from behind large, waxy leaves, curious as to what brings such a strange light to their nighttime.

This is the experience of contrasting the bold against the darkness. While a color, on its own, may appear vibrant, the intensity is only exaggerated when set against a black backdrop.

In this Tangled Vines collection of home accents, we find that colors hold magic. So we bring these wild shades of summer’s night inside, where we live and where we sleep. Black represents the nighttime, while bold yellows, pinks, and greens remind us that there is life inside that darkness.

Now, let’s travel to India for a moment. Where exotic insects and animals reign over lush forests, dining each day on sweet fruits and spending their nights running with mischief. While in the towns, everyday people direct their energy into the making of beautiful things that capture the essence of their wild surroundings. 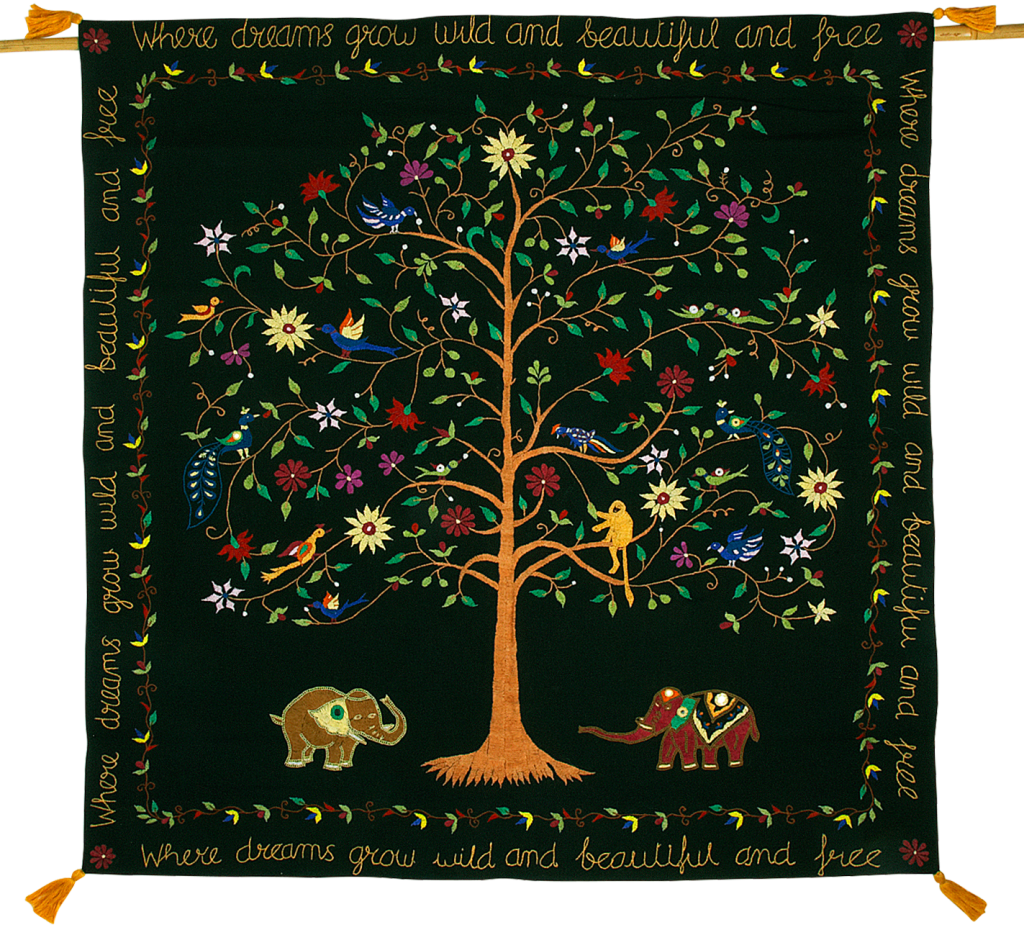 The Dream Tree Wall Hanging shows bright colors shining through the darkness. It’s easy to imagine that animals gather at this magic tree in the middle of a summer’s night. It’s the stuff of fairytales, and each stitch gives hope to a woman in need of refuge. 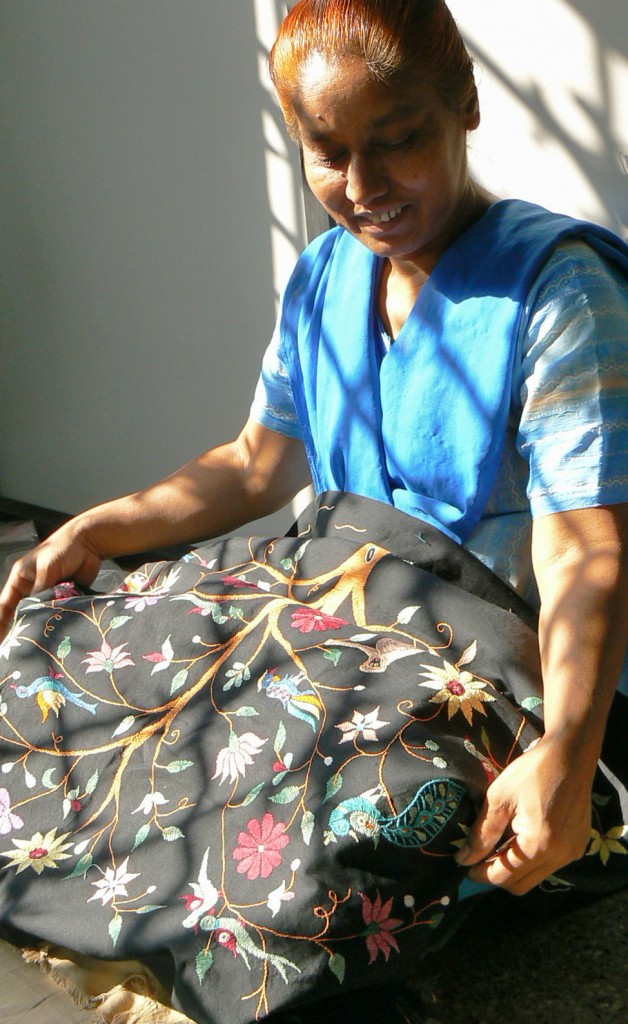 In 1954, a group of Dominican Sisters started a hospital in Ahmedabad—a region known for its textile mills. As global competition rose in the 1980s, many of these mills were closed and the unemployment rate skyrocketed. The Sisters saw a need to begin an embroidery program, to help provide income opportunities to people (especially women) who would otherwise have nowhere to go.

The region of Ahmedabad continues to suffer from religious and political conflict. As recently as 2002, religious riots broke out, and St. Mary’s became a refuge for many women, whether they were Christian, Hindu or Muslim.

Many of their pieces are embroidered in the tradition of the Kathiawadis, incorporating small, reflective mirrors into the fabric and adopting traditional motifs such as elephants, peacocks, or flowers. 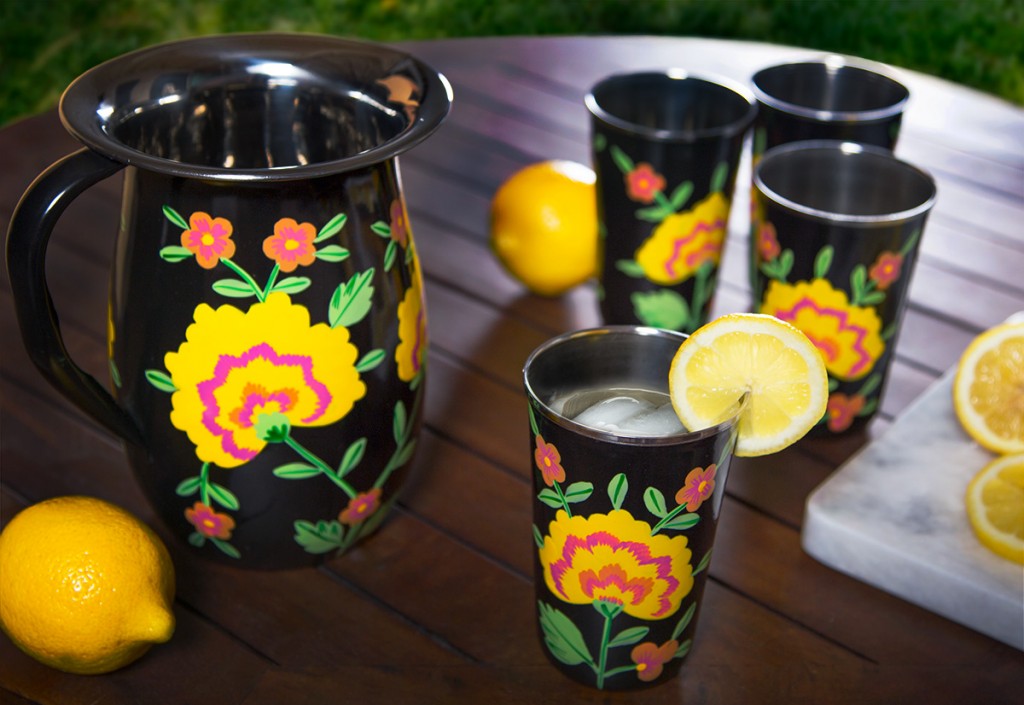 Bright colored flowers against a dark background create a bold contrast. And since these pieces are crafted from metal, they are ideal for outdoor use… picnics or poolside, these tumblers and pitcher won’t shatter if the summer gets a little wild.

The Noah’s Ark artisan group was founded in 1986 when a businessman named Samuel Massih saw that handicraft artisans were being exploited by exporters and middlemen. He decided to put a stop to the injustice by starting his own small workshop operated out of his family’s home near Moradabad. 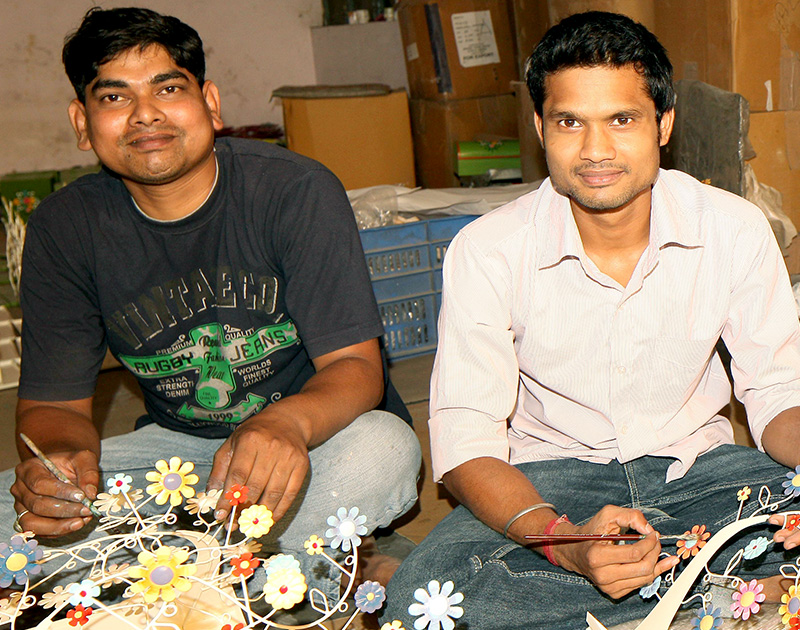 This matching metal pitcher and tumbler helps to preserve the ancient metalworking skills that are so important to the artisans of Noah’s Ark. With each tumbler made, one more opportunity that is presented to an artisan. This is a means of earning a stable income while preserving cultural heritage.