Tea is second only to water as the most common beverage in the world. An international symbol of hospitality and kindness, tea spans nearly all cultures and creeds, but takes on special forms to reflect people and climate. Let’s explore a few of the most iconic tea traditions:

Credited as the origin of the very first teas, China embraces many types of tea, but the most popular is oolong, served hot and plain in a small ceramic cup. Originally created for medicinal use, tea has since become an important part of many ceremonial and social interactions, from a simple gesture of appreciation to an ancient wedding tradition. Tea houses are popular in this part of the world, and are often more like small motels where guests can pay for lodging, rather than what we might think of compared to a coffee house or café.

Tea made its way from Asia to the U.K. in the early 1600s and quickly became a staple of British culture and cuisine, as the warm drink proved to be a comfort to the cool and rainy climate. Served in small ceramic cups with handles (to protect fingers from the steamy hot liquid), the biggest shift we see in this interpretation of the drink is the addition of milk! Sometimes served with sugar and often accompanied by a light snack of scones with jam or tea cookies (or biscuits, as they would say). In some circles, teatime is a meal in itself that includes an array of savory finger foods.

Tea plants were brought to India by the British to break the China tea monopoly, and as in Britain, teatime is an important meal. Since dinner happens later in the day, tea is taken around 4:00 pm and usually includes small, savory items, like samosas. And also like the British, Indian tea usually includes a lot of milk. Throw in some classic Indian spices (like cinnamon, cardamom, clove, and even black pepper) and you have “masala spiced chai,” (“chai” translating simply to “tea”) which has become popular in the U.S. in recent years, though most of India enjoys their tea without spice.

Morocco is famous for its mint tea, which is usually a combination of Chinese green tea with fresh spearmint sprigs. Typically served hot in a small glass cup with sugar mixed in, this drink can be found throughout Northern regions of Africa and up through the Mediterranean. Throughout all times of day, even in the hottest times of year, this drink is served and consumed hot to reflect a belief that consuming hot tea on a hot day will actually make you feel cooler. Tea bars are as popular as bars serving alcohol in Morocco as places for people to gather and socialize.

Strong black tea is served hot in a small glass similar to those found in Morocco, but the shape is curved like a tulip and it’s set with a ceramic saucer and demitasse spoon. Another similarity to Moroccan tea is that it is served hot throughout the day, in all seasons, and is commonly found in tea houses or even from street carts. A main difference is that sugar is offered in one or two cubes on the side, leaving the drinker to decide how sweet they prefer to take their tea. A common Turkish snack would be a cup of çay with simit—a circle of bread covered in sesame seeds (like a mix between a bagel and soft pretzel).

Sugar seems as appropriate an ingredient as any to define the American interpretation of tea culture. This form of tea has taken various forms throughout history, largely due to changes in international trade. Having first started as an alcoholic punch (similar to the modern mint julep), it eventually became a mix of iced black tea (usually steeped from tea bags) and mixed with lots of sugar. This rendition can be accompanied by any meal, (but usually BBQ or other casual, Southern style foods), or enjoyed by itself on the porch on a hot day. 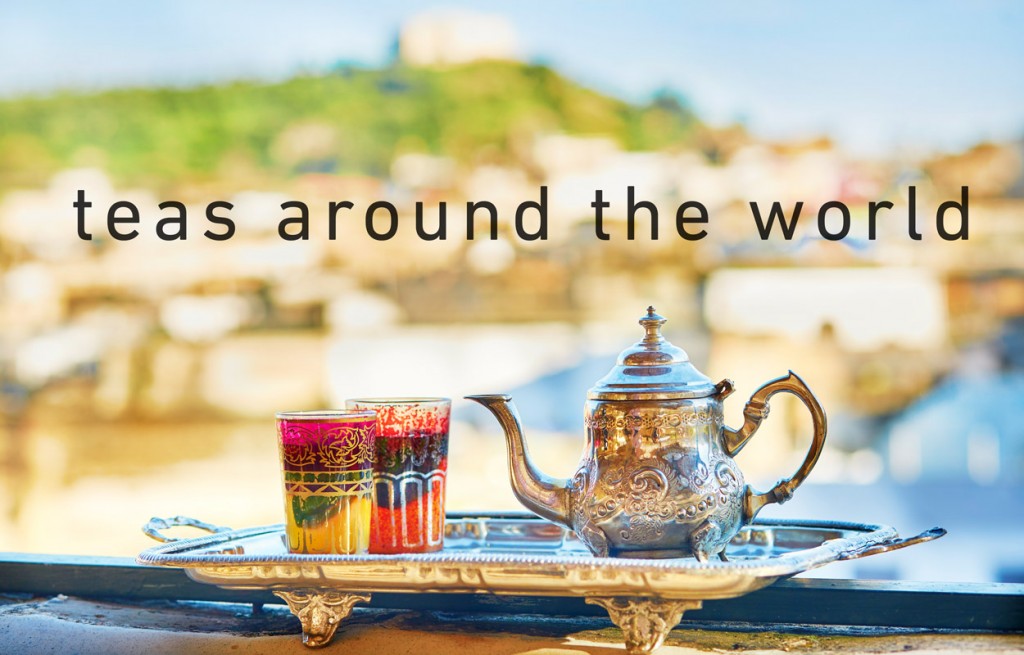 Wherever you are, anywhere in the world, chances are, you will find tea. It may look and taste different, but ultimately, it’s a beverage that brings people together. Regardless of tolerance to caffeine or sugar, there is a version suitable for every kind of person, young or old. It can help to clear the mind, balance the body, and most importantly, act as a universal gesture of hospitality, when language may get in the way of communication. It’s more than just a drink to bring comfort on a cold day; it shows that even though we may live in different countries and have different customs, we’re really not that different after all.