India is renowned for its long history of intricate designs. You may have seen photos of Indian brides on their wedding day— wearing saris stitched with gold and ornate gold jewelry. This tradition of embroidery design and golden embellishment dates back centuries. Royal robes and wall hangings of ancient kings were embroidered with golden thread, with precious stones or pearls sewn into the fabric. The technique was called Zardozi, and this tradition is the namesake of the Zardozi Original workshop in Kalitala, India. This village has been filled with skilled Zardozi embroiderers since the Mughal Dynasty, but two centuries of British rule, industrialization and the absence of royal patronage rendered the exotic craft nearly extinct. 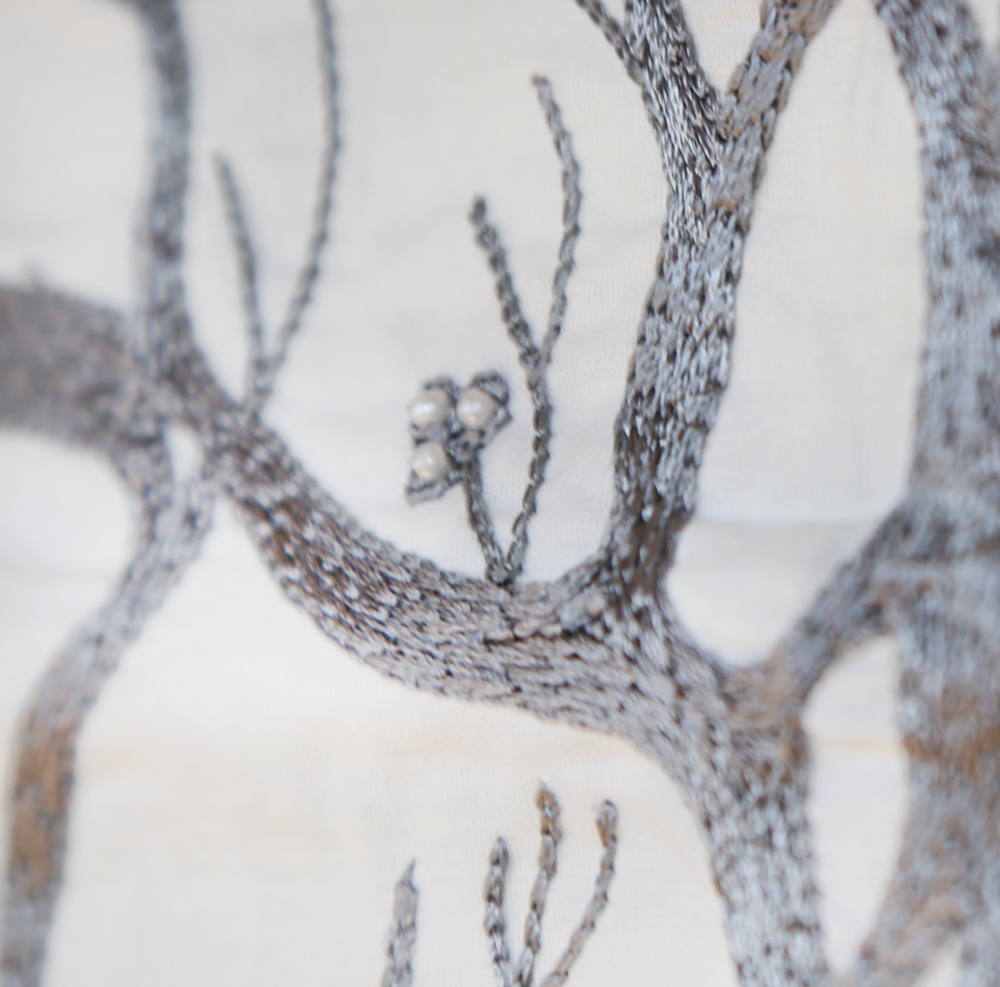 The leader of Zardozi Original is a man named Heera Mondal. Having once been a migrant worker, he found that the strenuous tasks were adversely affecting his health, so after some soul-searching, he decided to set up his own workshop to pursue and protect his ancestral craft. Craft Resource Center (CRC), a fair trade organization based out of Kolkata, aims to revive and reinvent lost crafts throughout India, while providing artisans with the support they need to market their products and succeed in their endeavors.

Mondal teamed up with CRC in 2007 to find guidance in how to run his business in a way that would be fair to his employees, and to receive design consultancy in order to make their crafts as relevant to Western customers as possible.

One of the newest designs they’ve been working on is the Ari Tree Wall Art, where silk thread is embroidered into cotton fabric to create a beautifully modern take on the Tree of Life, using the same type of hooked needle that would have been used with gold to create the silk pattern. 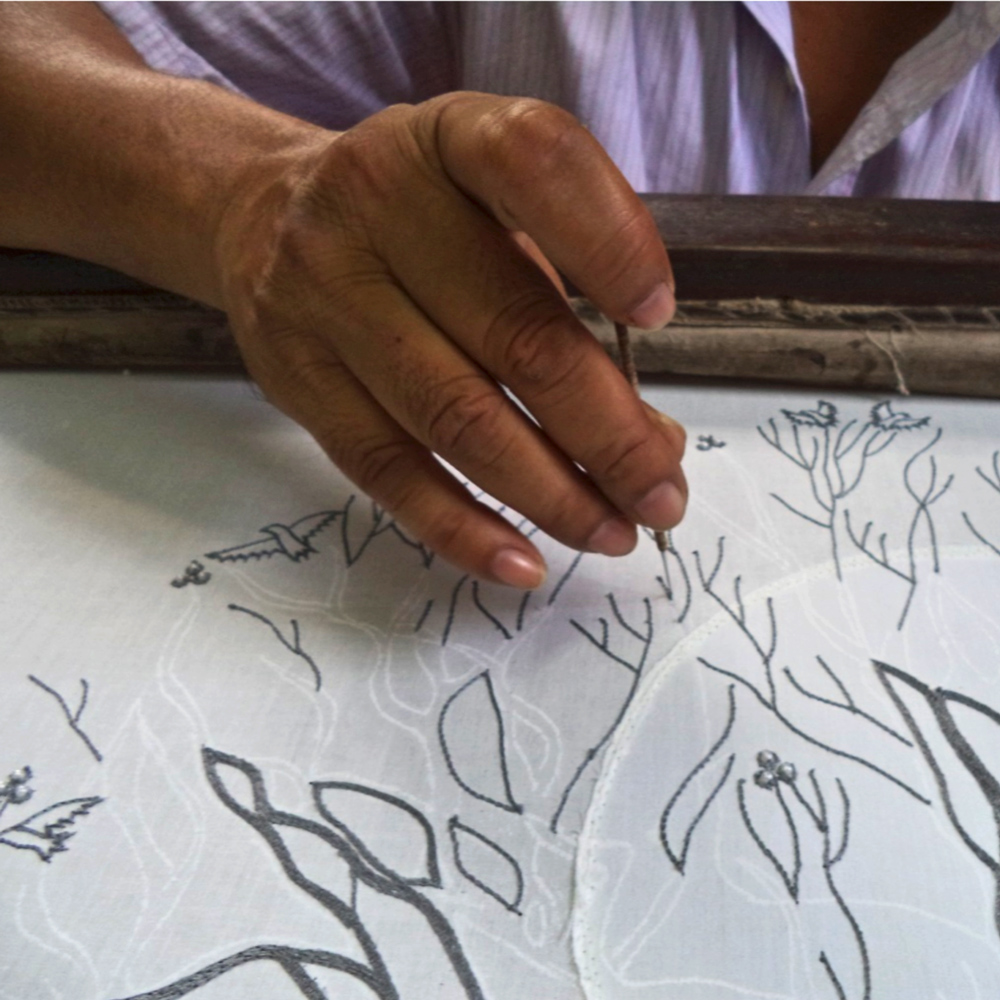 One of the skilled artisans behind this piece is Shaikh Halim, who most enjoys stitching the birds flying towards the sky. 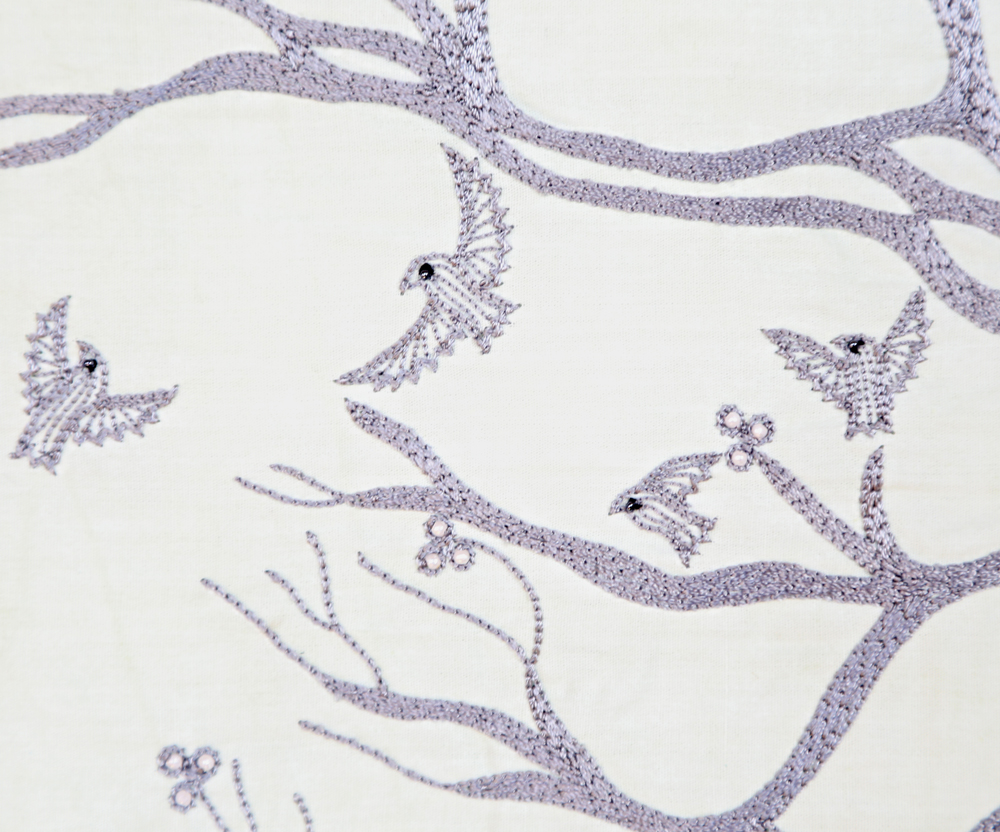 I presume my creative power will enhance if I can chirp like birds sitting on branches of trees and fly fearlessly flapping my wings towards the blue sky, 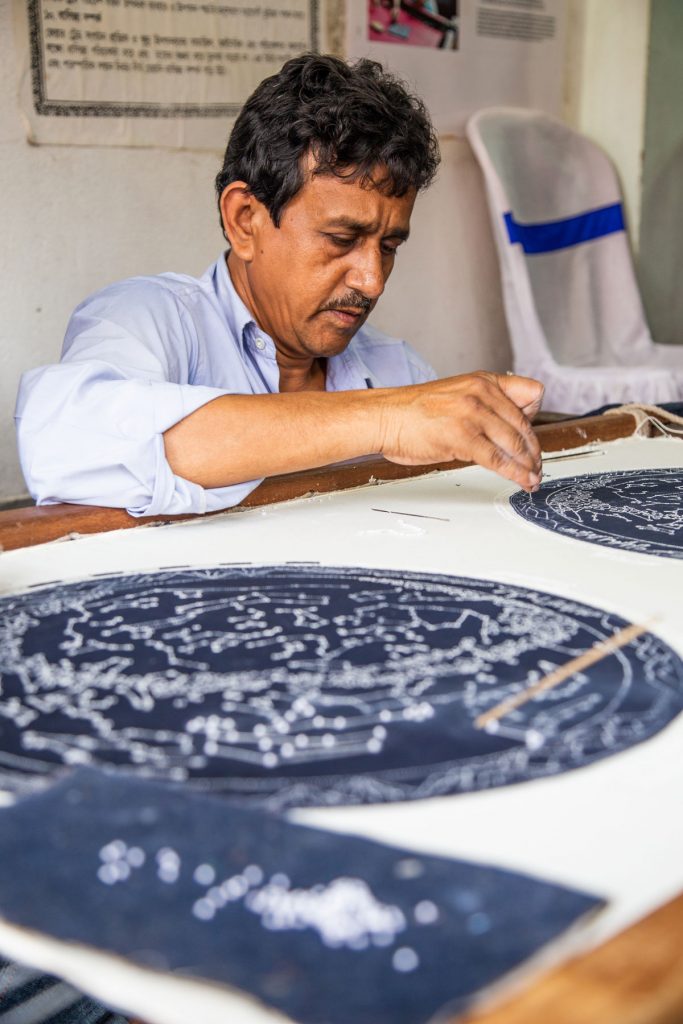 Most of the other artisans explained that their favorite part was embroidering the trunk of the tree, because it supports growth for the rest of the tree—just as each artisan hopes to be for their own families. 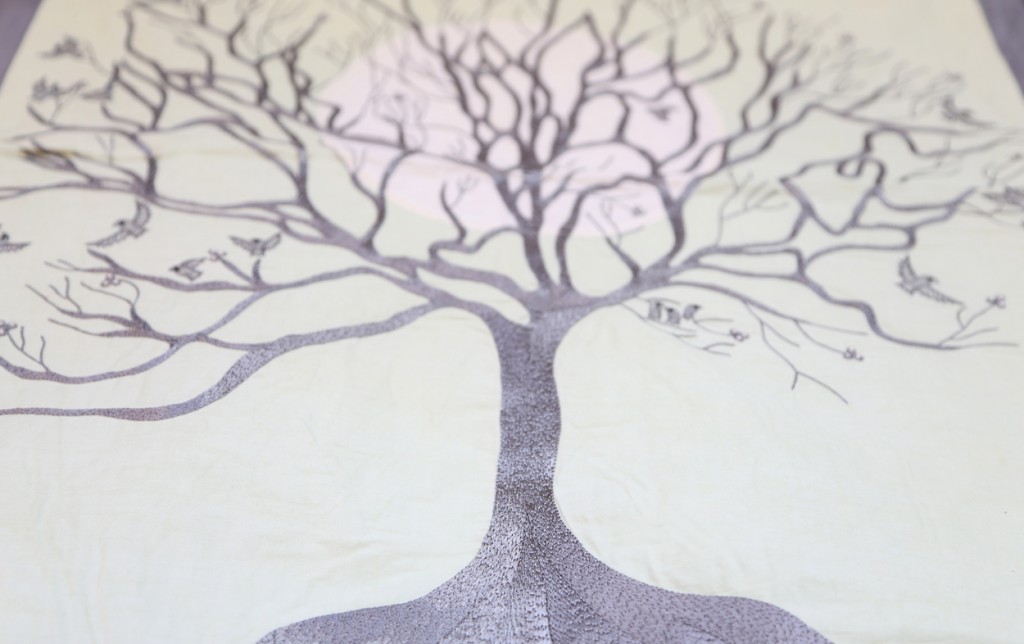 In Western culture, embroidery and sewing was traditionally a women’s craft. But, the Zardozi embroidery of ancient kings was practiced by men, not women. Shaikh’s father was a Zardozi embroiderer who passed away when he was just 10 years old. Raised by his brothers, Shaikh learned the art of embroidery as a child, following in his father’s footsteps, and became so skilled that he impressed many of the more experienced artisans in his town. Today, he is married with two children of his own and has embraced the fundamentals of fair trade. Education, nutrition, health, hygiene and the environment ensure holistic development for every member of his family. He lives in a brick house with a hygienic toilet, provides health care for his family, and is proud to send his children to school. Most importantly, he has been able to set up a savings account to cover the cost of any unforeseen needs that might arise. 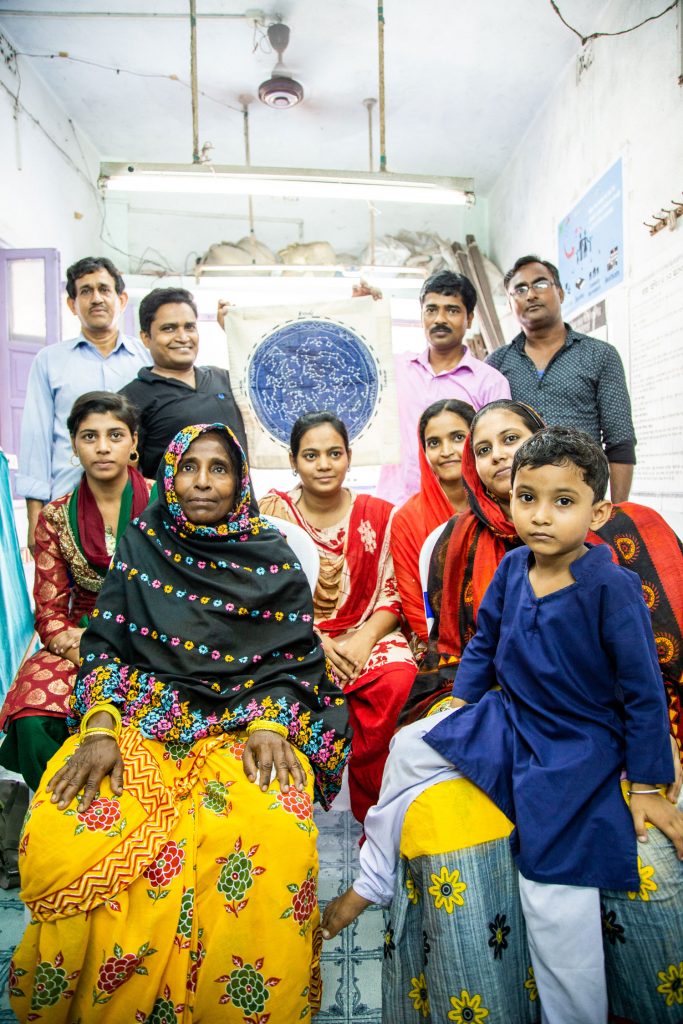 The tree of life symbol is sacred and can be found in many cultures, taking on slightly different names and different meanings in each, but generally symbolizing the link between heaven, Earth, and the underworld. Trees themselves are intricate, beautiful and inspiring. No two are entirely alike. They seem to set the mood for each season and space. There are few symbols that have spanned so many religions, geographic areas and lengths of time. In this sense, the tree of life is truly universal and special. The symbol has been depicted in artwork, literature, music, film, even video games. It’s an image that most people on this earth can relate to and is used to communicate an idea that has been embraced by mankind since the very beginnings of civilization. It can be argued that the tree of life has another meaning—it symbolizes the commonality of people, the beliefs and interests that we all share, and that indescribable something that makes us all human. While we may disagree about all sorts of things, we all find the Tree of Life rooted in our ancestry, no matter what our background may be. 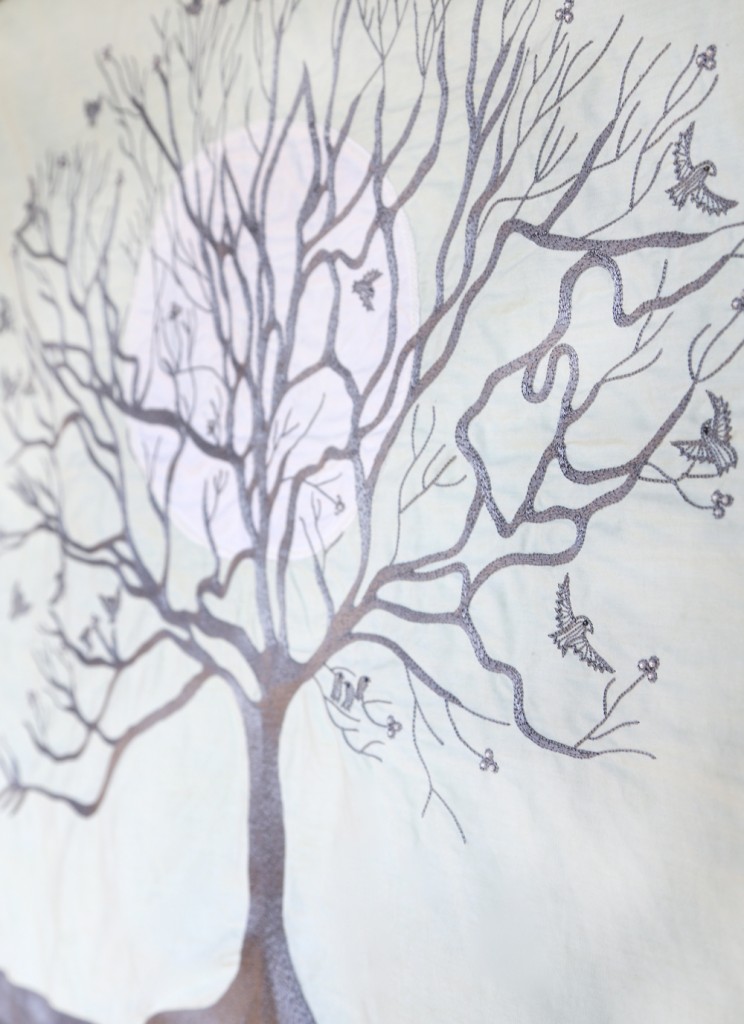 Even though the artisans who carefully craft this embroidered wall hanging live on the other side of the world, there are common experiences that we all share, and the tree of life is a testament to that. While there may be different types of trees around the world, it’s an image that we can all identify with and find meaning in. The tree of life links artisan to customer in more ways than one.